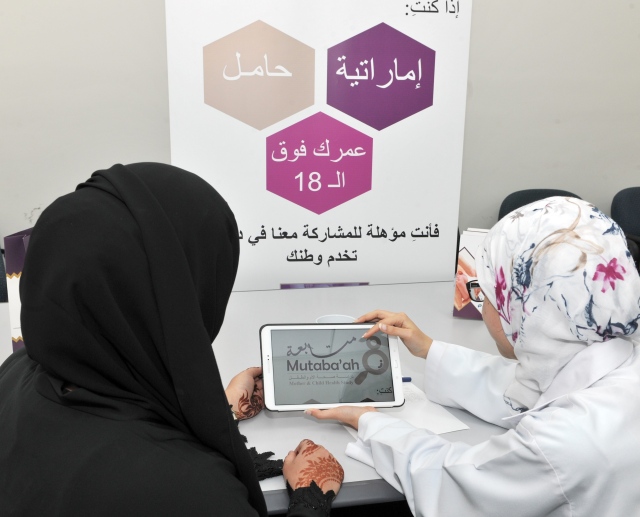 The College of Medicine and Health Sciences at the United Arab Emirates University revealed that the data of more than eight thousand pregnant Emirati women were collected as part of a “follow-up” study, which is the first of its kind at the country level, on mother and child health, noting that the study relies on collecting and analyzing data in turn from Pregnancy period, until the child reaches the age of 16 years.

The follow-up study aims to establish a pioneering platform for maternal and child health research in the United Arab Emirates, by providing an inventory of data that will enable researchers to study and link the different health outcomes of mother and child with a set of factors that mothers and children are exposed to in the early stages of life.

The platform will provide new local evidence based on research on risks and expectations related to maternal and child health and the impact on society and public health, which will help in setting health policies and programs to improve health and health services for mothers and children in the country on the one hand, and managing and directing future plans for health services and expenditures in the country on the one hand. Other.

The Associate Professor at the Institute of Public Health at the College of Medicine and Health Sciences, “the principal investigator of the study”, Dr. Luay Awad Ahmed, told “Emirates Today” that the study aims to provide data on the health of mothers and children and to examine the factors that affect them in the prenatal stages. In addition to tracking the health of infants, children and adolescents in the future, indicating that the recruitment of participants began in October 2017 and the study succeeded in attracting nearly eight thousand participants until last November.

He explained that these data will enable research and analysis of various influencing factors and practices and health outcomes, including lifestyle, behavioral, environmental, social, economic and demographic factors, in addition to other cases, including overweight of the mother, diabetes during pregnancy, premature labor, preeclampsia, and cesarean delivery.

He added: “The most prominent findings of the study in the current stage of research involving pregnant mothers” and which were published in medical journals “are the high percentage of pregnant women who are late in starting to see a doctor to follow up on their pregnancy, which may negatively affect the outcome of pregnancy,” noting that The study will continue for many years, to keep pace with the age stages of the children who are polarized in the study.

He pointed out that the study succeeded in collecting data through sequential questionnaires, and from the medical file of the pregnant woman and her child after birth, and information that is not routinely available in the medical records is collected, including social and economic lifestyle, exposure to the surrounding environment, in addition to extracting additional information from routine medical records. Such as human and physiological measurements, and laboratory, and reports on any medical intervention, pregnancy conditions, details of childbirth, and the surrounding period, birth and growth and development of the child.

Luay pointed out that the physical, psychological and social effects in the first months of life and later in childhood have important effects on health and growth, and thus on the period of adolescence and adulthood, pointing to the aspiration of the research team participating in the “follow-up” study that the results obtained from the study have an effective effect on Maternal and child health in the UAE and the region.

Rostourism offered to extend the tourist cashback program until June 20

Uruguay is ready to purchase the Russian Sputnik V vaccine