76 years ago, the man dropped the first atomic bomb, with unthinkable surprise 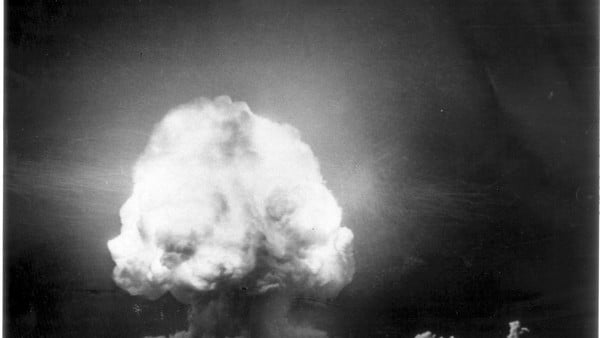 On July 16, 1945, at 05:29:45 local time, it was carried out at the Arenas Blancas Missile Range, in Alamogordo (New Mexico, United States), the first explosion of an atomic bomb.

The Trinity test (Trinidad) discharged an energy equivalent to 19 kilotons (19,000 tons of TNT) and left a crater in the desert floor 3 meters deep and 330 meters in diameter.

After this test that confirmed in practice the beginning of the era of nuclear weapons it was discovered in the affected area the formation of a vitrified material composed of the smelting of arcosic sands, clay and copper from the cables installed in the area; with the presence of quartz, feldspar and traces of plagioclase, calcite, hornblende and augite.

This newly formed material, usually of green or reddish tones, was called trinitite or Alamogordo glass, and its existence has been scientifically documented since 1948 (see American Mineralogist 33: 360-362).

Analyzing a sample of red trinitite, a team of researchers from the United States and Italy has discovered a composition hitherto unknown of icosahedral quasicrystal, Si61Cu30Ca7Fe2.

The authors of this research, whose results have been published in the journal PNAS (online version May 17), highlight that their discovery is “the oldest existing anthropogenic quasicrystal currently known”, with the particularity that it is a material from that the exact moment of its formation and origin is known (the Alamogordo atomic bomb of 1945).

An aerial view of ground zero 28 hours after the Trinity test. Photo: dpa

The authors also recall that on Earth the existence of quasicrystals is not known naturally formed, although materials of this type have been found in various meteorites, such as the Khatyrka (discovered in 1983 in the Koryak Mountains, Russia).

A difficult Nobel to win

Materials science professor Dan Shechtman discovered in 1982, while working at the Israeli Technological Institute, a material as organized and stable as glass but with a non-periodic ordering structural form.

It took Shechtman more than two decades to demonstrate that the new material was an example of a type of compound that he called quasicrystal, but finally, in 2011, he received the 2011 Nobel Prize in Chemistry for it, and his material has since been known as Shechtmanite.

“Fat man” or “Fat Man”. This was the name of the first atomic bomb. Photo: AP

Details of the new compound

The quasicrystal created by the Trinity explosion in a red trinitite sample has five-axis symmetry, which it is not possible in a natural crystal, exposes the Los Alamos National Laboratory (United States) in an informative article published on its website.

“Quasicrystals are formed in extreme environments that rarely exist on Earth, “explains Terry C. Wallace, director emeritus of this famous laboratory and co-author of the now published study. The formation of these materials” requires a traumatic event with shock, extreme temperatures and pressures. We don’t usually see that, except in something as dramatic as a nuclear explosion. “

Red trinitite sample from Alamogordo in which the quasi-crystal has been discovered. Photo: PNAS via La Vanguardia.

The thermodynamic and shock conditions under which this Alamogordo quasicrystal was formed are, “approximately, comparable to those that formed the natural quasicrystals discovered in the Khatyrka meteorite, dating back at least to hundreds of millions of years and maybe since the beginning of the solar system.

“This quasicrystal it’s magnificent in its complexity, but no one yet can tell us why it was formed in this way. But someday a scientist or engineer will realize that and the scales will be removed from our eyes and we will have a thermodynamic explanation for their creation, “says Professor Wallace.

“Then, I hope, we can use that knowledge to better understand nuclear explosions and ultimately lead to a more complete picture of what a nuclear test represents, “he adds.

Los Alamos National Laboratory, created during World War II as a secret facility and centralized to coordinate the scientific development of the Manhattan Nuclear Weapons Project, the article on the new quasicrystal with an expression loaded with good intentions: “The discovery of new material could one day help nuclear non-proliferation.”