600 participants in the “Al-Arabi for Virtual Genetic Studies” symposium 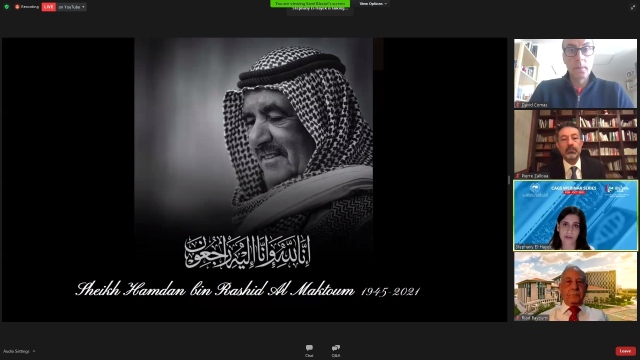 The Arab Center for Genetic Studies (one of the Hamdan Medical Award Centers), yesterday, held its second virtual seminar in its series of seminars, where it discussed the topic of “Population Genetics”, with the presence of more than 600 participants from all over the world.

The family of the Sheikh Hamdan Award for Medical Sciences and the Arab Center for Genetic Studies were struck by the news of the death of His Highness Sheikh Hamdan bin Rashid Al Maktoum on March 24, and the symposium began with the speech of the Assistant Director of the Arab Center for Genetic Studies, Dr. Stephanie Al Hayek, in which she welcomed the attendees at the second virtual seminar.

She emphasized that the late Sheikh Hamdan was a true visionary, as he devoted a large part of his time and efforts to improving the state of health care here in the United Arab Emirates and also around the world.

She added, “The death of the forgiven represents a great loss to the center, the award, and the health and humanitarian sector as a whole. The vision of the late to reduce the burden of genetic disorders in the Arab world was the main reason for the establishment of the Arab Center for Genetic Studies, and we hope that we will continue working within the framework of the vision of the forgiven.”

The Executive Director of the Award, Abdullah Bin Sougat, praised the scientific material of the symposium, the richness of the discussed topic, the efforts of the Arab Center team and the award, and stressed that the center’s organization of this symposium aims to enhance communication between specialists even in light of the Covid-19 pandemic.

Speakers during the symposium were: Professor of Genetics at the University of Balamand in Lebanon Dr. Pierre Zalloua, Head of the Human Genome Diversity Group at Pompeo Fabra University in Barcelona, ​​Dr. David Comas, and the seminar was moderated by the Mohammed bin Rashid University of the United Arab Emirates, Dr. Riad Bayoumi.

The center had started a series of virtual seminars last February with a symposium that discussed the topic of “genetic factors in infectious diseases”, with more than 400 participants from all over the world.

It is noteworthy that the center will hold its third symposium in a series of seminars on May 26, 2021, and will discuss the topic of “gene therapy.”