60 years old | Kimmo Helistö’s career path has gone from radio, music and politics to saunas: “I now realize that I have used to make the right wrong choices” 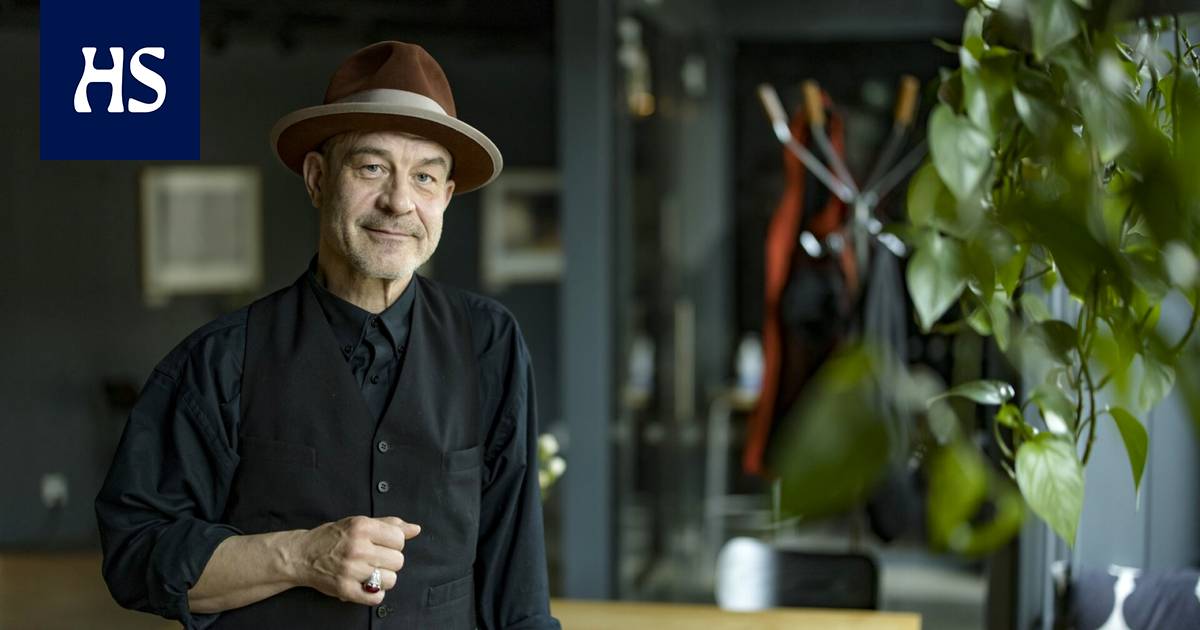 “Most of all, I feel like a producer, a producer of experiences,” says Kimmo Helistö from Helsinki, who has promoted himself to a sauna marshal.

Whatever of those is the tastiest, inquired Kimmo Helistö from his five thousand Facebook friends after Eurovision in his update, which was complemented by a picture of seven different headdresses. He had promised to eat one if Italy won the visas.

How did it go then?

Of your own headwear, did the workman’s cap, a Russian fur hat, a summer straw hat, a round sailor hat, or that traditional cylinder hat taste best? Or someone else?

“The hat is not eaten and I can stay, because there are far too many stories involved,” Kimmo Helistö says and laughs and then presses his newest favorite, the slightly enthusiastic Fedora, in Jätkäsaari ‘s New Sauna.

The custom-made brick-brown felt hat fits her big head perfectly and also reflects the life situation. Helistö has been a private entrepreneur, sauna entrepreneur, from his official position for fifteen years.

“Most of all, I feel like a producer, a producer of experiences,” defines Helistö, who has arranged a wide range of headwear with his winding career path.

He has been a musician, radio journalist, DJ, event producer, film producer and music producer, as well as an association activist and municipal politician – and now an entrepreneur in two public saunas.

After high school, he was a class teacher at Jakomäki Primary School for one school year, and he also had to become a big one. But the teacher training institute was “missing five” after a fellow student hinted that the Live Music Association Elmu was starting an advertising-funded radio station, Radio City, in Ruoholahti’s Bat.

“I bought a recorder and attached a Gonzo-style report on what it’s like to travel in a tram with a pump.”

Report was impressed, as he received an invitation to an interview and work among the pioneers began immediately on May Day 1985, at a turning point in Finnish radio broadcasting. And without editorial experience.

“I notice now that I have used to make the right wrong choices that don’t seem realistic at first,” says Helistö.

As a presenter and deey, he was part of Radio City’s standard equipment for ten years and also made his own series, the longest running of which had introduced new bands. Echoes from the basement.

In the final stages of Pest, Helistö was persuaded to chair Elmu, who is behind Lepako and Radio City for three years – and it again had unintended consequences. Helistö became interested in municipal politics and promised to be a candidate for the Helsinki Greens’ council.

“Once again, I started to regret and feel like I was drifting into a situation I didn’t really aim for.”

Although it went well.

In the spring of 2006, Kimmo Helistö started to host the latest Helsinki-based Kallion Sauna Arla from Helsinki and was able to ignite a “sauna boom”, which will now be steamed in Jätkäsaari’s New Sauna. Picture: Mika Ranta / HS

This “A semi-celebrity known to the Helsinki rock youth” – as Helsingin Sanomat described him – was elected to the council in October 1992 in the cold without a campaign. In the Greens’ election sheet, Helistö’s motto was only Mind Games, perhaps as a reminder of a long series of programs The Lost Lennon Tapes, the Finnish version of which he had just submitted to Radio City.

In total, there were sixteen council years, some of which were in the town planning board and city council.

“In the first season, I was teased in the speaker bowl and was always on the losers’ side. Then I realized that nothing alone can accomplish anything. Municipal policy is a slow game of chess. ”

Helistö also tried twice for Parliament, but there was not enough radio sound there – and maybe good so, at least for sauna lovers. In the spring of 2006, he started to host the latest Helsinki-based Kallion Sauna Arla and was able to ignite a “sauna boom”, which will now be steamed in Jätkäsaari’s New Sauna.

But no more than saunas, because Helistö does not want to be just a sauna master or a sauna master, even though he has promoted himself to a sauna marshal – because today, Friday, he shares his birthday with a Finnish marshal.

Sixty-year-old Helistö is amused by how long those who have done the work tube are starting to think about everything that has not been done in their birthday interviews, what there should be time for soon. He does not plan or promise anything, even though there is a lot of work to be done.

Admittedly, he intends to fulfill one wish.

“I’m buying myself a new great hat as a birthday present.”

Kimmo Helistö’s first beloved headdress was a fine sheriff’s hat, which he received in June 1966 as a five-year gift. However, the joy ended short. “During the summer vacation trip, I started vomiting in the car and Mom pushed her hat in front of my hat in her emergency head. It stayed there, somewhere along the way.” Picture: Kimmo Helistö’s home album

Kimmo Helistö played the saxophone in the band Kadotetut, whose second album Too Big Mouth was released in the spring of 1985 – just before he started working on the new Radio City. “We did quite a bit of gigs at the time and we were really in good shape,” recalls Helistö in the middle of the cover. Ari “Fage” Fagerström (top left), Henrik Duncker, Ahti Pelttari and Sanna Salmenkallio also played in the lost. Picture: Cover and cover photo: Kari Kalén

In October 1999, the cultural center Lepakko, which received a demolition sentence, operated Lepakkoradio, which broadcast the program for ten days. It was attended by a large number of veterans of Lepako and Radio City, which operated in Lepako’s premises, of which Christian Moustgaard (left), Njassa, Teemu Lehto, Outi Popp and Kimmo Helistö roasted in front of the house on Porkkalankatu in September 1999. “I had already done my grief work, as you can see with a smile. I later woke up that the Bat could have saved it,” says Helistö. Picture: JUKKA LEHTINEN

Kimmo Helistö received 754 votes in the October 2004 municipal elections and re-entered the council as a representative of the Greens. Admittedly, at this point, a week before election day, it was not yet known. “I was empowered at my best at the time: there was enthusiasm, there was a twist. And this Danish commodity filler, the iconic Christiania Bike, was a deliberate statement from me.” Picture: Keijo Leväaho

Kimmo Helistö became a sauna entrepreneur in May 2006, when there were only three public saunas in Helsinki. “My friend said that whatever you do to Kimmo, it’s like you’re hosting some kind of public toilet,” Helistö recalls. “But no speech helped. I had already lost my heart to Kallio’s Sauna Arla, the atmosphere of that past world.” Picture: Mika Ranta