6 sailors rescued from Dubai Creek. Their boat had a water leak 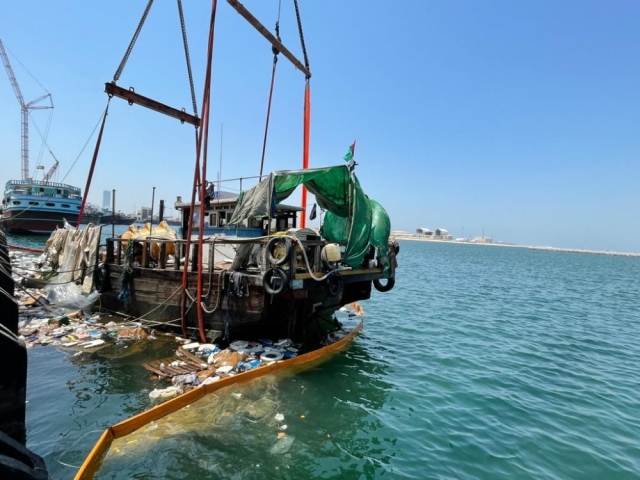 Maritime rescue patrols and maritime security at the ports police station in Dubai rescued six sailors of Asian nationalities, who were on board a large wooden boat, which was exposed to water leakage as a result of a crack in its hull due to overloading, and the patrols used rescue balloons and a crane to maintain the safety of the boat and prevent it from sinking .

The head of the Maritime Rescue Department, Lieutenant Colonel Ali Abdullah Al Naqbi, said that the Dubai Police Command and Control Center Department received a report from the captain of a boat about water leakage into it while leaving the country through the Dubai Creek heading to an Asian country, adding that the Maritime Rescue Patrols and Maritime Security worked immediately on Rescue the sailors, ensure their safety and secure their access to safety, pointing out that it became apparent to marine rescue divers that there was a large crack in the structure of the boat, which led to large quantities of water leaking into it, so an immediate decision was taken to work on directing the boat to the nearest pier before sinking Fully.

He pointed out that the marine rescue patrols and maritime security were able to deliver the boat to the pier, and divers and rescue balloons were used to float the boat, and a mechanical crane was used to lift the boat. Al-Naqbi stressed that the success of the flotation process helped unload the boat completely, as well as cooperating with Dubai Municipality to recover the goods that floated on the surface of the water, which contributed to preventing the owners of the goods from incurring large financial losses.

He called on boat captains to use the Dubai Police application “Sail safely”, which provides the feature of entering the trip plan and the locations to which they are heading, to help them in case their boats are exposed to any emergency situation, pointing out that the application provides sailors and boat drivers the distress feature with the click of a button.

Corona vaccinations: Statutory health insurance physicians: In May, vaccination prioritization will be superfluous