6 citizens organize traffic to break down a signal in Muwailih 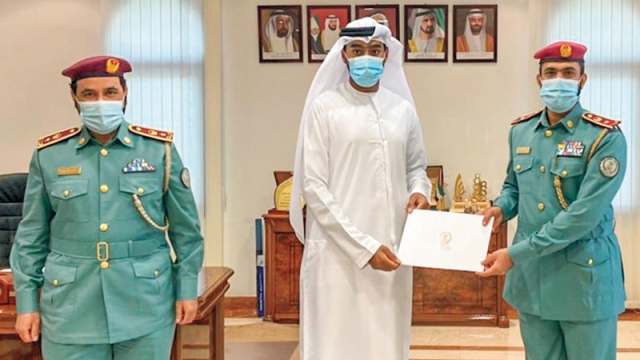 Six citizens regulated traffic and traffic, while the traffic lights were disrupted in the Muwailih area of ​​Sharjah, due to power cuts.

Under the directives of Sharjah Police Commander-in-Chief, Major General Saif Al-Zari Al Shamsi, the Director of the Traffic and Patrols Department, Lt. Col. Muhammad Allai Al-Naqbi, in the presence of the Deputy Director of the Department, Lt. Col. Omar Boughanim, honored the six citizens for regulating traffic and traffic, during the breakdown of the traffic signal in the Muwailih area due to an interruption. electric current.

Al-Naqbi praised their good behavior and positive contributions, praising the kind gesture they took out of a sense of social responsibility and their sense of patriotic duty, indicating that what they have done is a role model in instilling a sense of security and safety among members of society, and enhancing the quality of life.

For their part, the honorees expressed their sincere thanks and appreciation to Sharjah Police for this honor, praising the role of the Sharjah Police General Command and the directives of its commander and his constant eagerness to honor its collaborators.

The Augusta Masters reconciles with its past