£569.8 million in revenue for Manchester City 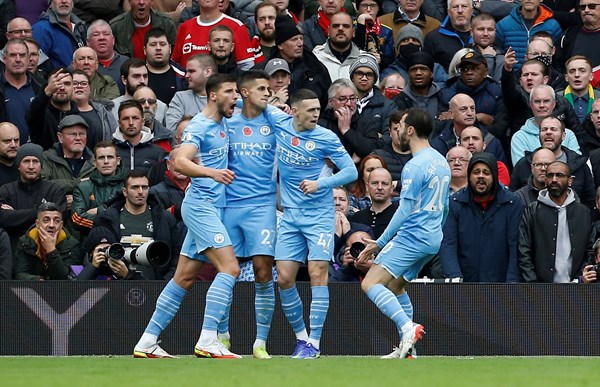 Today, Wednesday, Manchester City published the annual report for the 2020-2021 season, announcing its return to profitability, and the continuation of the trend towards steady long-term growth, which had been halted as a result of the “Covid-19” pandemic, and the club witnessed an increase in Total revenue, up 19%, to £569.8 million, with a profit of £2.4 million.
The season also witnessed another success for Manchester City on the field, as the men’s team managed to break a large number of records, and ended the season by winning the English Premier League title, as well as winning the Carabao Cup, and was able to reach the Champions League final for the first time in Club history.
In the report, His Excellency Khaldoon Khalifa Al Mubarak, Chairman of the Manchester City Football Club, spoke about the club’s achievements during the season, and also confirmed the club’s aspirations for the future, and said: “The success of our first men’s football team embodies the club’s current story, which included awards Which the team won this year as the club’s fifth title in the Premier League, and the sixth championship in the League Cup, to be added to the team’s achievements over the past decade, and the story of the future will be written by the next generation, who made his name in history this year, when the Manchester Academy team won City, and the U-18 team in the two league championships in which they participated, and this means that Manchester City holds titles in all categories in the men’s competitions.”
His Excellency Khaldoun Al Mubarak continued to highlight in the report the positive financial performance of Manchester City club during the last season, as he stated that the club’s return to achieving profits embodies the strategy that the club follows in the long term, with regard to the globalization and diversification of revenues, and the ability to rely on outstanding performance in football tournaments. The football club, and the support of partners and shareholders, as he said: “There is no doubt that the vision of His Highness Sheikh Mansour bin Zayed Al Nahyan, Deputy Prime Minister and Minister of Presidential Affairs, owner of the club, which was established in 2008, embodies this reality that we live in at the present time after three years. Ten years ago, we represented a sustainable and socially responsible organization, looking for talents and working to develop them, and participating in sports competitions to win titles at the local and European levels.
His Excellency Khaldoon Khalifa Al Mubarak concluded by talking about the Champions League final: “Despite our great disappointment that we did not win the final match that was held in Porto, we were very proud to have reached this stage in the first place, and we are now looking forward to the future, We know that we will return with a stronger and more experienced level, knowing that not only did we reach this high level, but we were also able to reach a high level of stability that gives us great confidence in the future.”
Ferran Soriano, CEO, referred to the personality of the men’s first team, after a difficult start at the beginning of the season, where the team finished thirteenth in late November 2020: The team did their best, and continued to win, to score one of the best seasons in the history of Manchester City.”
Ferran Soriano also spoke about the institution’s outstanding performance on a larger scale, noting that: “From a business perspective, we were pleased to return to making profits, after we succeeded in overcoming revenue challenges caused by the pandemic, (Covid- ) did not stop us. 19), and we continued to grow, innovate and develop new ideas.”

See also  All the anti-Covid measures from January to March, here are the fundamental dates to mark on the calendar

Despite its milder symptoms, a "pessimistic" alert from the World Health Organization about "Omicron"

Mancini: “Qatar? We let ourselves go a bit, but I’m still optimistic”