52.6% of the target group were vaccinated with the Corona vaccine 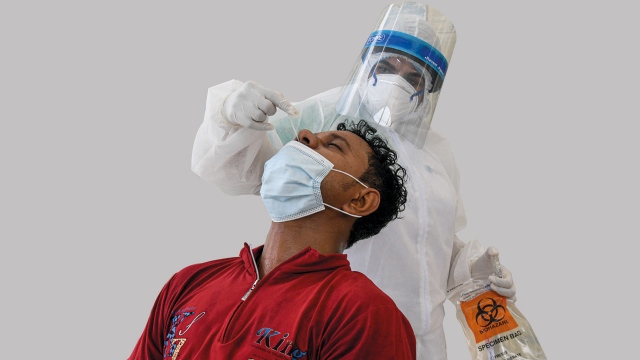 The UAE government held a periodic media briefing to introduce the latest developments and cases related to the emerging corona virus in the country, during which it announced a new achievement for the UAE by vaccinating 52.6% of the target group, while the most prominent precautionary measures for the coming month of Ramadan were announced, which included preventing any breakfast tables from being held at Mosques, while limiting the duration of the Isha and Tarawih prayers to no more than 30 minutes, with the continued closure of women’s prayer areas, service and health facilities, and the prayer areas outside.

In a recorded speech broadcast during the briefing, the Minister of Health and Community Protection, Abdul Rahman Al Owais, announced that the national vaccination campaign had reached its recently announced goal of vaccinating 52.46% of the target group of the total UAE population, and the vaccine was also provided to 70.21% of the elderly. And people with chronic diseases.

He said: “With the continuation of the daily reports related to vaccine doses, we are approaching the provision of nearly seven million vaccine doses in more than 205 medical centers in the various regions of the country, in a positive step that places the UAE at the forefront of countries in the rate of vaccination, and these numbers reflect the tremendous efforts it is making Our health sector, and we are working to provide the vaccine to 100% of our society.

Al-Owais added: “The availability of vaccines is one of the most important achievements of the state in our battle against the pandemic, and it is available to everyone free of charge in the various centers that operate at their maximum capacity, which requires everyone to join hands, cooperate and take the initiative to take the vaccine to ensure the achievement of community immunity and a return to normal life.”

For his part, the spokesperson from the National Emergency and Crisis Management Authority, Dr. Saif Al Dhaheri, announced the most prominent preventive measures that must be followed during the coming month of Ramadan, saying: “In the interest of the health and safety of society, we advise everyone to avoid gatherings of councils during Ramadan nights, and to stay away from family visits. And avoid distributing and exchanging meals between homes and families, and only members of the same family who live in the same house can eat group meals.

He pointed out that it is not allowed to establish family or institutional breakfast tents or in a public place to eat group meals, or to provide and distribute breakfast meals in front of homes and mosques, and those wishing to coordinate with charitable organizations, donate and pay alms and zakat electronically, pointing out that restaurants are prohibited from distributing breakfast meals for those fasting. Inside or in front of the restaurant front, and its distribution is limited to workers’ housing complexes through direct coordination between restaurants and the management of labor housing in each region, taking into account the rules of social distancing.

Al Dhaheri added: “It was decided that Tarawih prayers would be held according to the precautionary controls against (Covid-19), in addition to continuing to work with all preventive measures and measures to perform the prayers, and not to allow any breakfast tables in the mosques, with the duration of the dinner and Tarawih prayers being limited to no more than 30 minutes. And mosques will be closed immediately after prayer, while women’s prayer areas, service and health facilities, and the prayer halls of the external roads will continue to be closed.

He continued: “With regard to the Qiyaam prayer in the last ten days of the holy month, a continuous assessment of the epidemiological situation in the country will be conducted, and procedures updated simultaneously with developments, and work will continue to suspend religious lessons and seminars in mosques, with the ability to participate in lectures and lessons electronically, and we encourage Reading the Qur’an via smart devices, charitable donation and giving alms and zakat electronically. ”

Al Dhaheri stressed that intensive inspection campaigns will be carried out during the holy month, and legal measures will be taken against all violators, whether individuals or institutions.

The Ministry also announced the recovery of 2,651 new cases of those infected with the virus. The Ministry announced the provision of 89 thousand and 746 doses of the “Covid-19” vaccine during the past 24 hours, thus bringing the total of the doses that have been provided until yesterday to six million and 668 thousand and 637 doses, and the rate of vaccine distribution is 67.43 doses per 100 people.

The lost pride of Spanish transport