5 spin off to overcome the ending of Attack on Titan 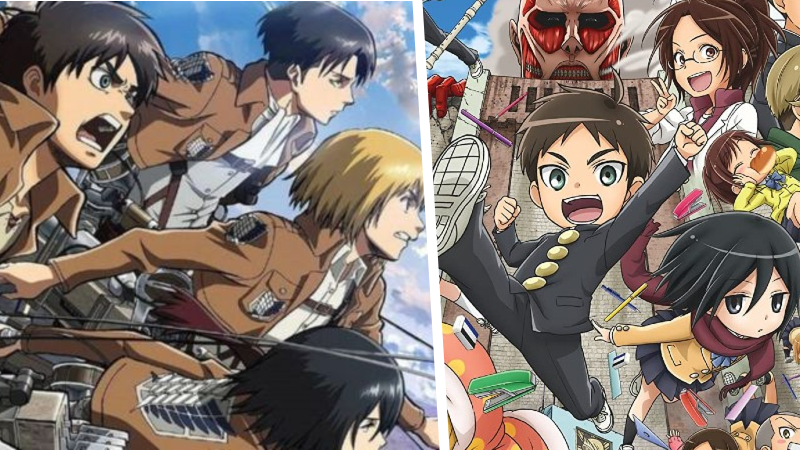 Attack on Titan you have everything ready to say goodbye forever with the last volume of sleeve, and if the spoilers Internet are true, it may not all be very satisfied.

As with any great work that ends, fans will experience a sense of emptiness by not having Eren and company every week, although all is not lost.

Fortunately there are several spin off that will help you overcome the end of the series, as many of them are loaded with humor, although others simply expand the story or approach it from another perspective.

The spin off of Attack on Titan

If you did not know, there are five alternate works to the main one of Hajime isayama, and you can check them out if you refuse to part with Eren and company.

The first one is Attack on Titan: Junior High, a spin off that transforms the whole story into something much lighter and more digestible, even for children.

In this work we see all the characters turned into high school students, so there is no blood or brutal scenes, but funny situations where the titans can simply steal your food.

In total there are 12 episodes in format anime, although they also have a printed publication.

The second adaptation of Attack on Titan is named Spoof of Titan and began to be published in 2014 by Kodansha, although it was never adapted to anime.

This little comic book recounted some of the events of the scout corps, of course, with a humorous twist that we never saw in the main series.

It is not very deep, but it complements the story of the characters.

Third we have Detective Armin, a children’s book where the main character is the blond-haired boy, who becomes a kind of Sherlock Holmes.

This work did not make it to anime either, but it is a fun way to see the universe of Attack on Titan.

The following post could be considered a rarity as it is not created by Hajime Isayama, but by writers from America.

Attack on Titan Anthology shows us a different approach to the world of the titans, and its pages feature the participation of important names such as Scott Snyder, Gail Simone, Evan Dorkin, Mike Oeming, Paul Pope, among others.

This work leaves the funny tone of those that we showed you previously, but it is still worth consulting.

Last but not least, we have two live action movies which were released in 2015, and yes, we can consider it a spin off, since it changed several things about the original story, including events and characters.

We are sure that these works will keep you busy for a long time, at least in what you find another favorite series.