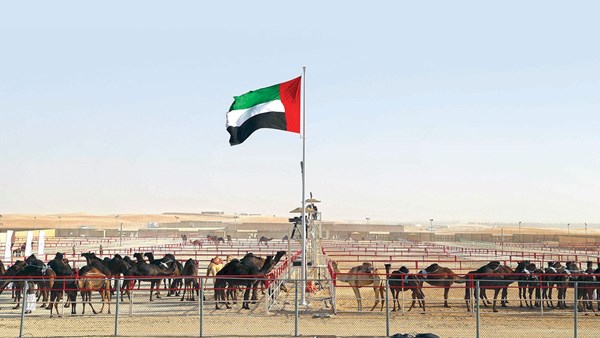 Under the patronage of His Highness Sheikh Mohammed bin Zayed Al Nahyan, Crown Prince of Abu Dhabi and Deputy Supreme Commander of the Armed Forces, competitions for the 14th session of the “Al Dhafra Festival” were concluded yesterday evening, organized by the Committee for the Management of Cultural and Heritage Festivals and Programs in Abu Dhabi, in Madinat Zayed in the Al Dhafra Region in the Emirate Abu Dhabi.
The closing day of the festival witnessed the coronation of the 30 winners of the Bayrak Al Majahim run in the camel match.
The results resulted in extracting the “Muhammad Saleh Mujren Al Ameri” camel purifier for Buraq Al Majahim for this session. The camel purifier “Eid Rashid Theban Muhammad Al Mansoori” came in second place, and in the third place the “Abdullah Mubarak Ali Al Marri camel filter”.
His Excellency Major General Faris Khalaf Al Mazrouei, Commander-in-Chief of Abu Dhabi Police and Chairman of the Cultural and Heritage Festivals and Programs Management Committee, said that the Al Dhafra Festival, which embodies the approach and path of the founding father Sheikh Zayed bin Sultan Al Nahyan, may God rest his soul, recorded great success in this session in addition to the successive successes that He achieved it thanks to the wise leadership’s interest in all festivals and events in the Emirate of Abu Dhabi.
He stressed that the festival in its session that began in the year of preparation for the fifty and ended during the first month of the year 50 with the march of 50 years of Emirati giving in light of the union of the state of goodness and humanity and the country of love, coexistence and peace, so that the festival confirms Sheikh Zayed’s saying «God have mercy on him»: «Who is not It has a past, it has neither a present nor a future », and here we are today attached to the heritage of our fathers and ancestors and we are keen to pass it on to successive generations through heritage festivals, cultural programs and various projects that serve this great legacy.

Significant increase in posts, attendance and achievements
After the city of Zayed hosted, for more than two months, the activities of the fourteenth Al Dhafra Festival, which topped the heritage and cultural scene, and camels were the main element in it, the most interested and the most valuable, and the activities concluded with the Al-Bairaq run for the camel category, this course that is the jewel of the circuits and the most precious of laws And the summit of the competitions, after it concluded in the past few days the competitions of the local and Maghim circuits, which witnessed a remarkable increase in this session in terms of participation, attendance and achievements, which reaffirmed the value of camels and their place in the hearts of the people of the Emirates and the region and the care and attention they receive and their keenness to develop and develop as the most prominent The vocabulary of our ancient heritage and the legacy of ancestors, which is a source of pride and pride for the people of the homeland.
The heritage competitions have also achieved remarkable success and honorable results in archery competitions, purebred Arabian horse racing, Arabian saluki race, falcon race, falcon competition, Arabian saluki competition, and the Sheep of Bliss competition, after the organizing committee, with the guidance of the wise leadership, included these competitions in the schedule of the festival competitions For this session, despite the precautionary measures, to emphasize the great interest in all the vocabulary of the rich heritage of the UAE and the region, to remain firmly in the souls and a source of pride for its close association with the specificity of identity, culture, customs and traditions.

612 prizes distributed over 85 runs in 8 heritage competitions
Issa Saif Al Mazrouei, Vice Chairman of the Committee, said that the Al Dhafra Festival in this exceptional session, which lasted for about three months, was through 48 days of heritage competitions and virtual events, where 612 prizes were presented, distributed over 85 tracks within 8 heritage competitions.
He added: The camel showcase at the festival witnessed the largest gathering of camel owners, and it included 57 rounds for which 486 prizes were allocated in the local and Majahim categories, within 6 age groups (Al-Mafarid, Al-Haqaiq, Al-Lakayat, Al-Radio, Al-Thanaya, Al-Hol), where 31 courses were allocated to the category Localities with a total of 258 prizes, and 26 courses for the concepts category, with a total of 228 prizes.
He pointed out that the Festival Organizing Committee, in cooperation with the Councils Affairs Office of the Abu Dhabi Crown Prince’s Court, organized virtual lectures on the social media platforms “Our Heritage”, during which a number of agencies were hosted, including (Disaster and Crisis Management in the Central Operations Sector of Abu Dhabi Police, Advanced Scientific Group. Abu Dhabi Agriculture and Food Safety Authority, General Authority of Islamic Affairs and Endowments, Abu Dhabi Center for Waste Management (Tadweer), Abu Dhabi Health Services Company – Health, Criminal Investigation and Investigation Directorate at Abu Dhabi Police, Department of Community Development), in order to communicate with the festival fans and interact with them Remotely.

Foodstuffs The Korona year drove Finns from restaurants to groceries, but non-alcoholic beverages boosted sales in the brewing industry

Yo soy: ‘Marilyn Manson’ didn’t impress the jury with the song “Without you”