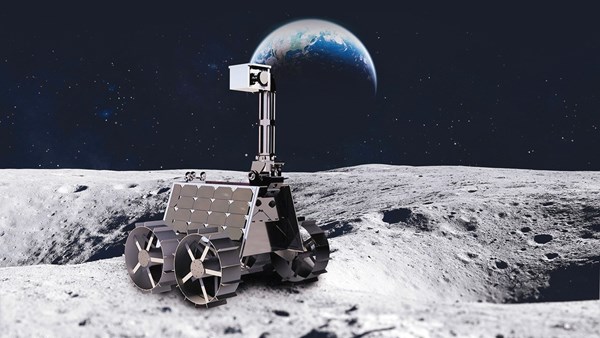 The Emirates Moon Exploration Team continues to work on the achievement of the Explorer Rashid, as it is designed and built with 100% Emirati efforts, so that the UAE will be the fourth country in the world to participate in the missions of exploring the moon for scientific purposes through an explorer that will be developed by a team of Emirati engineers, experts and researchers at the Mohammed bin Rashid Space Center . 4 specialized teams are working on the project, which includes a team building the engineering structure of the explorer, another in charge of communications, a third specialist in engineering and risk management, and a fourth in charge of thermal and imaging systems. During the design of its own movement system, where the electronics were built in it, the team also finished assembling and integrating the prototype of the “Rashid” explorer, which will run the first Arab mission to the moon’s surface. The team also completed functional tests in the center’s laboratories, and is currently preparing for endurance tests that It will be conducted in conditions that simulate the environments of space and the moon.
The explorer will be launched from Florida in the United States in the last quarter of 2022, and despite its small size, the “Rashid” explorer is expected to send at least 1,000 images, including moments of landing on the moon’s surface, thermal and subjective images, as well as night shots of the Earth, as well. Navigation data including flight time and lunar surface topography, inertial measurement unit data, temperatures and power consumption levels will be transmitted.
The explorer “Rashid” will be completely built in the UAE and will perform its tasks on a lunar day. The explorer will contain high-quality and efficient technologies, based primarily on data analysis and results, without the need to send them to Earth, as was the case in Previous missions, and among the devices that will be equipped with the “Rashid” explorer during the development phase, are 3D cameras, advanced and effective sensor and communication systems, solar panels to provide it with energy, cameras to monitor movement vertically and horizontally, microscope cameras to monitor the smallest details, and thermal imaging cameras.
This project is an essential part of the UAE’s space exploration strategy, which aims to build new capabilities and knowledge capabilities, inspire future generations to enter the field of space science and research, and enhance opportunities for international cooperation and partnerships in the field of space exploration. After carrying out this mission, the UAE will join the list of countries that have succeeded in Sending exploratory missions to the Moon, after the United States, Russia and China.
The Emirates Moon Exploration Project aims to achieve the vision of His Highness Sheikh Mohammed bin Rashid Al Maktoum to consolidate the name of the UAE in the space sector on the global scene by carrying out exploratory missions that enrich human knowledge and contribute to the development of technology in the entire world. This project will also contribute to shaping new features of the economy. Space and knowledge in the UAE, in continuation of the progress made by the country in the field of space exploration, to reach our main goal in consolidating the name of the UAE among the leading countries in this scientific and vital field.

5 locations
The UAE intends to land the explorer Rashid on the near side of the moon, and to choose 5 possible sites before the historical mission. The area has slopes greater than 15 degrees, the distribution of the rocks should be less than 30 cm in height, the areas are near the moon, a prime location and a reserve site will be determined.