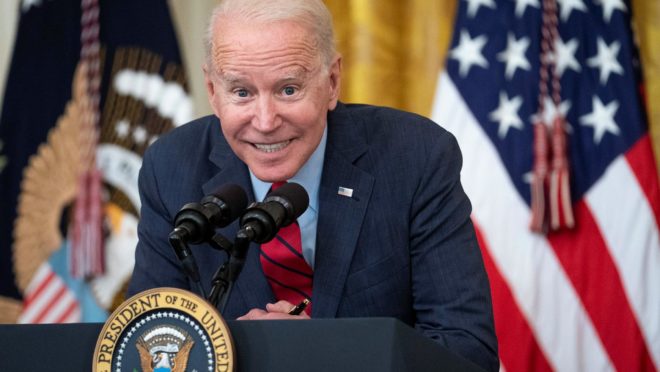 0
SHARES
2
VIEWS
Share on FacebookShare on Twitter
US President Joe Biden speaks at the White House on a bipartisan deal made in the US Senate for an infrastructure plan, June 24| Photo: EFE/EPA/SARAH SILBIGER / POOL

On many occasions, political leaders need to set aside ideological positions a little to make more practical political and diplomatic decisions, aiming to balance gains and losses. Check out some moments when the government of the President of the United States, Joe Biden, adopted more realistic practices that, at times, contrasted with his speech:

On Sunday (27), the United States carried out the second attack under the Biden administration on pro-Iranian militias in the Middle East. The country’s armed forces bombed Iran-backed militia positions in border areas between Syria and Iraq, according to Pentagon spokesman John Kirby, who did not detail whether there were any casualties. The NGO Syrian Observatory for Human Rights reported that seven people died and several were injured.

Kirby stated in an official statement that, on the orders of President Joe Biden, US forces carried out defensive bombings against facilities of armed groups backed by Tehran. The air strikes targeted arms storage and operation centers, two of them in Syria and one in Iraq. The spokesman said these targets were chosen because militias, including Iraq’s Kataeb Hezbollah and Iraq’s Kataeb Said al Shuhadah, launched drone strikes against US positions and Iraqi soldiers.

The first military action ordered by Biden came in February, with air strikes against facilities in eastern Syria also used by pro-Iran militias. The move was a response to attacks by these groups against bases in Iraq that house US military personnel that left one civilian dead and one soldier injured.

At the time, the attacks rekindled debate between the US Congress and the White House over the limits of the war powers of the country’s chief executive, and some Democrats questioned the legal justification for the offensive.

In addition, the Biden administration has been accused of hypocrisy by critics, who rescued comments by the Democrat’s staff made when the government of its predecessor, Donald Trump, authorized attacks on Syrian territory in response to the use of chemical weapons by the dictator Bashar’s forces. al-Assad in 2017 and to target chemical weapons facilities in 2018.

Current US Vice President Kamala Harris questioned the attacks in 2018, when she was a senator. “I am deeply concerned about the legal basis of last night’s attacks,” Harris said in April 2018.

Biden’s spokeswoman, Jen Psaki, also commented at the time that “Assad is a brutal dictator, but Syria is a sovereign country.”

Also with regard to immigration, the Democrats were surprised by apparently adopting a more practical stance, which contrasts with the party’s stance on the issue, when Kamala Harris recently visited Guatemala and sent a clear message to the population of the Central American country that intends to immigrate to the US: “Don’t come,” said the American vice president, who is the daughter of immigrants.

Harris was given the complicated task of controlling the increased flow of migrants who have been arriving at the US southern border. On her trip to Latin American countries earlier this month, her first international as vice president, she warned that the journey to the border is dangerous and benefits mainly illegal trafficking in people. She also said that people who arrived at the border would be sent back to their countries.

Along with Guatemalan President Alejandro Giammattei, Harris said: “Don’t come. Don’t come. The United States will continue to apply our laws and keep our borders secure,” and added: “If you reach our border, you will be sent back”.

The pressure on the Biden government is great. More than 178,000 migrants arrived at the US southern border in April, the highest recorded in a month in more than two decades, according to US officials. More than 40% of these people came from Guatemala, Honduras and El Salvador. In March, nearly 19,000 unaccompanied children trying to cross the border were found by authorities.

Harris’s message to immigrants, considered harsh, ended up calling more attention than discussions with Central American leaders on strategies to reduce the flow of migration and actions to combat the causes of the problem, such as poverty and corruption. It has also received criticism from allies such as Democratic Representative Alexandra Ocasio-Cortez, who said Harris’ comments were “disappointing.”

“First, seeking asylum at any US border is a 100% legal method of arrival,” she said. “Second, the US has spent decades contributing to regime change and destabilization in Latin America. We can’t help burn down someone’s house and then blame them for running away,” he added.

After four years of criticism by Democrats of President Trump, considered very close – and even a “puppet” – to Russian President Vladimir Putin, it was at the beginning of Biden’s term that Putin had two victories with the US: the relief of sanctions for companies that are building the Nord Stream 2 pipeline and the extension of the New Start agreement, which restricts the number of nuclear weapons the two countries can mobilize.

The Trump administration has imposed sanctions against all entities involved in the construction of the Nord Stream 2 gas pipeline, which will transport natural gas from Russia to Germany, because it believes it would increase Europe’s energy dependence on Moscow, and because Ukraine, Poland and the Baltic states will oppose the project. Sanctions were preventing the completion of construction, which is almost complete.

In May, Joe Biden announced that he will lift sanctions on companies as the project is nearing completion and sanctions could damage ties between the US and Europe.

While seeking to join forces with European allies against China as well as Russia, Biden felt that maintaining sanctions would be counterproductive.

The agreement between the US and Russia to extend the New Start (New Strategic Arms Reduction Treaty) for another five years, officially signed in March, was criticized at the time by those who thought the US was taking nothing in return for the agreement.

Last year, Trump had rejected Russia’s proposal to renew the agreement, which expired in February, as “unfeasible”. After taking office, Biden declared his intention to extend the treaty, a gesture considered “welcome” by Russia.