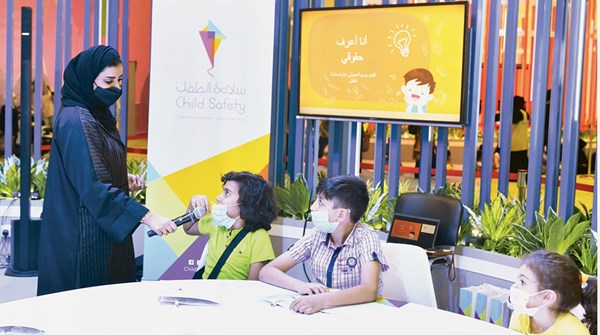 Hanadi Saleh Al Yafei, Director of the Child Safety Department in Sharjah confirmed to Al Ittihad that the department seeks, through its activities and programs, to establish appropriate concepts and practices to consolidate child safety in society at all levels, whether in the family environment, the home environment, school and public life, or globally. Virtualization and the safe use of the Internet and social media by children, in a manner that preserves their security and safety, and avoids all forms of risks. She said that in the second quarter of this year, the Department presented 29 workshops and initiatives benefiting 2,793 children, adolescents and parents, aimed at raising awareness of children’s rights, mental health and cybersecurity.
Al-Yafei said: “During the last period, great importance has emerged for the issue of children’s mental health, especially with the effects of the precautionary measures accompanying the Corona pandemic, in addition to educating parents and children about the importance of electronic security, in light of the increasing use of young people of Internet-related devices, which puts them in confrontation with the dangers of Of a different kind, the cyber security ambassadors had a contribution to raising awareness of ways to use the Internet safely. The administration continues to launch initiatives and organize workshops, based on the high satisfaction rate achieved by the previous workshops by the beneficiaries and management partners.”

She explained that the areas of awareness of preserving children’s safety and protecting them from dangers expand to include new axes that keep pace with the transformations in the lives of children today, and affect the digital world and what it takes to achieve electronic security for young people in terms of awareness of the steps for safe use of the Internet, avoiding bullying, raising awareness of basic rights and protecting children from abuse that they may be exposed to. she has.
Al-Yafei referred to the mechanisms for maintaining the safety of the child, which amount to educating parents on how to preserve the mental health of their children, in any of the health, social and economic conditions and variables faced by societies around the world, such as the Corona pandemic that imposed itself on all segments of society, including children. .
The Director of the Child Safety Department in Sharjah said: “These are the most prominent themes that the Child Safety Department of the Supreme Council for Family Affairs in Sharjah focused on, through a package of activities, initiatives and workshops, organized by the Department, during the second quarter of this year, targeting children, adolescents and parents, with the aim of instilling New knowledge of children’s rights, and the establishment of peace and confidence among the participants in the various awareness activities, which amounted to 20 workshops and 9 initiatives, benefiting 1,275 children and 1,518 parents.
She added: The second quarter of the year witnessed the launch of “Child Safety” of a study entitled “The extent of parents’ awareness of home safety and the mechanism of reducing accidents for children”, during which it aimed to identify the most prominent risks facing young children inside the home, and the impact of lack of community awareness on their incidence rates, in addition to monitoring Legislation and laws that protect the child from accidents caused by family neglect.
She explained that the Child Safety Department’s workshops focused mainly on children’s mental health, as it organized 3 workshops, benefiting 1,388 parents. Children, adolescents and parents on ways to avoid abuse that young children may be exposed to, in addition to workshops dedicated to raising awareness against bullying, in addition to two story workshops for kindergartens.
Hanadi Al Yafei addressed the keenness of the Child Safety Department, in addition to that continuous effort, to be present in international and local events and exhibitions targeting young people. General through a simplified review of the articles of the Law on the Rights of the Child.
Al-Yafei confirmed that in order to enhance the awareness-raising activities of the Child Safety Department, “Child Safety” published 6 videos on social media, through which it succeeded in reaching more than 20,000 viewers, and published 60 photos that received more than 49,000 views, increasing the percentage of follow-up to the Department’s account. Child safety on social media by approximately 15%.

goals and vision
The Child Safety Department was launched in 2011 under the name “Child Safety Campaign”, as one of the initiatives of the Supreme Council for Family Affairs, and continued its work as a campaign until Her Highness Sheikha Jawaher bint Muhammad Al Qasimi issued, in October 2018, an administrative decision establishing the “Child Safety Department”, to come To complement the goals and vision of the campaign, in spreading awareness of the importance of maintaining children’s safety and protection and achieving social stability for them, in order to reach a society in which children enjoy mental health and physical safety.

Message
Al Yafei said: The administration carries a message of awareness to the society of all its spectrum about the importance of protecting the child from neglect, abuse and exploitation, within the legally accepted limits, to preserve his rights and bring him up together, so that he enjoys physical and psychological safety within a cohesive family, through our active participation in developing policies The relevant national, through the design and implementation of initiatives and activities, in cooperation with strategic partners and authorities, and has addressed a number of issues so far, including: bullying, physical abuse, vehicle safety, falling from balconies, and cybersecurity.