27 years after the attack, the AMIA asked that the case have a judge “urgently” and questioned the “ineffectiveness and indifference” of the State 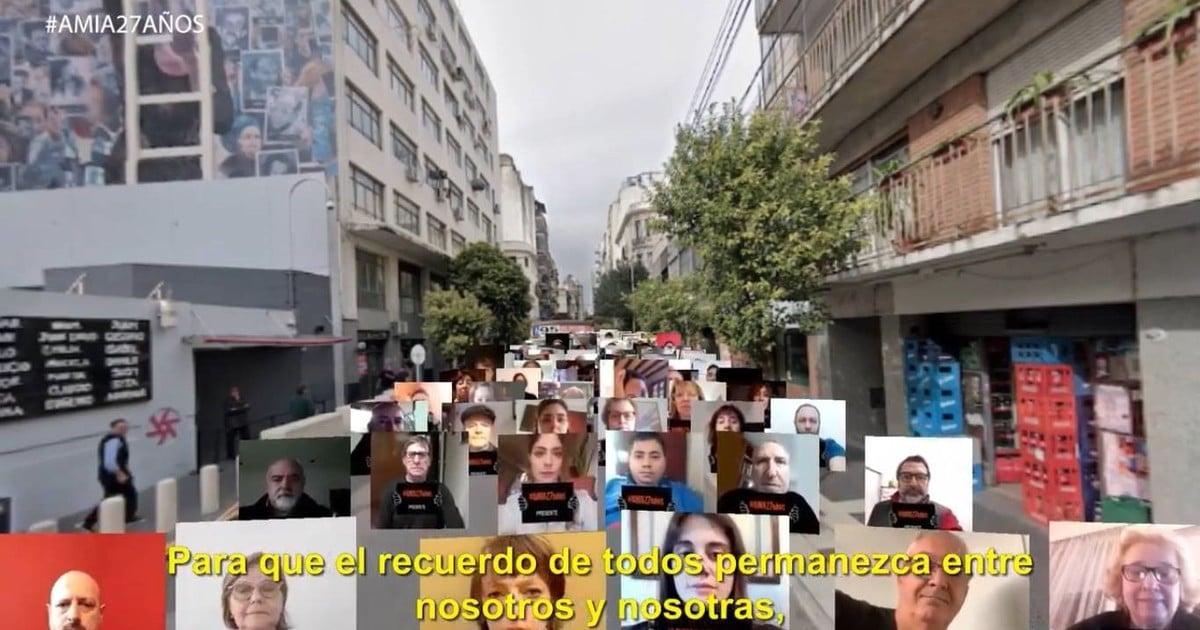 The Argentine Israelite Mutual Association (AMIA) asked this Friday that the case have “urgently” a judge and questioned the “ineffectiveness and indifference“of the State, when carrying out a virtual act to remember the 85 fatal victims and more than 300 injured of the terrorist attack perpetrated against its headquarters on Pasteur Street, on Sunday 27 years of the attack on the mutual.

“Federal Court No. 6, in charge of the case, does not yet have a permanent judge appointed. This unresolved situation does nothing more than collaborate so that nothing progresses.and. We need the institutional mechanisms to be activated urgently, and that the responsible court does not continue to be ‘vacant’ “, highlighted the president of AMIA, Ariel Eichbaum.

In his speech, the head of the entity stated that “they are the state powers, and not the victims, the only ones responsible for the networks of ineffectiveness, corruption and cover-up that prevent us from reaching justice “.

In this context, the president of AMIA, Ariel Eichbaum, affirmed that “the cause AMIA is a painful wound that still cannot heal “, and defined “the complaint about impunity” as “a flag” that they will continue to “raise until Justice is present.”

Eichbaum urged the national government to “intensify measures and exhaust resources to ensure that both Lebanon and the Islamic Republic of Iran agree to comply with the demands of the Argentine justice, and that they hand over those accused of having committed the attack, who continue to shelter and protect in those countries. “

“The participation of the Lebanese citizen known as Salman El Reda, whose real name is Salman Raouf, is more than proven and it is inadmissible that he continues to be under the care of the authorities of his country. The same happens with (Mohsen) Rabbani, (the former Iranian Ambassador to Argentina, Hadi) Soleimanpour and the other defendants, who receive protection from Iran and neighboring countries to which they travel frequently, “he said.

At the beginning of his speech, Eichbaum said: “27 years have passed since an explosion that still stuns us. An attack planned, organized and executed by fundamentalist terrorism, which marked the history of our country forever.”

In that sense, the AMIA head warned that it is “increasing” the “absence of results, the lack of achievements, the indifference”, and specified: “They force us to redouble our efforts so that this demand is, every year, listened to and attended by the authorities “.

“We must not accept this dire reality as natural. Our society cannot allow impunity to prevail, that the families of the fatal victims continue to cry without finding comfort. Preserving the memory of those who are no longer there and making our voices heard without compromise is a moral imperative, “he stressed.

Along these lines, he highlighted: “Twenty-seven years and it hurts us to have to repeat that there is not a single person convicted for the attack on the AMIA. The ineffectiveness and indifference of the powers of the State hurts us. “

In that sense, he questioned: “How long has the Special Prosecutor’s Office led by doctors (Sebastián) Basso, (Roberto) Salum, (Santiago) Eyherabide and the recently incorporated (Julio Gonzalo) Miranda, does not produce even minimal new and substantial information to help clarify a little more what happened? How do you spend or invest your time and resources? “

“The investigation of the attack is in his charge. Four prosecutors and we have been generating absolutely nothing of value for years. It is an inadmissible situation,” he continued.

In another section of his speech, the head of the entity highlighted: “Unfortunately, our country does not need to be explained what terrorism is. We have been the target of his macabre actions twice. For this reason, we stand out as a measure in the right direction when the Argentine State designated Hezbollah, responsible for the attacks against the Israeli Embassy in Buenos Aires and against the AMIA, as a terrorist organization. And we celebrate that this qualification remains firm until today. “

“That same path must continue with Hamas. An organization with close ties to Hezbollah. Both have the same matrix of hatred and death; they pursue the same objectives of destruction through criminal, cowardly and cruel acts,” he said.

Along these lines, Eichbaum argued: “Because of its history and democratic commitment, Argentina should lead regional efforts so that other countries on the continent join and declare these organizations for what they are: terrorist groups, without question and without ambiguity.”

In addition, the president of the entity asked “to Interpol to keep the arrest warrants in force and to the Argentine Foreign Ministry to carry out permanent monitoring that allows for early warnings, to identify when the accused travel to other parts of the world, to request their arrest. “

“That is the Justice we long for, for which we fight and for which we will always continue to demand. We do not want artificial solutions, or vain promises that will never be fulfilled, “he said.

At that point in his speech, the AMIA headline argued: “We want to say it as clearly as possible: trial in absentia is an instrument alien to our legislation and legal culture, contrary to our Magna Carta. We don’t believe in impromptu outings which actually contain a problem for the future: the failure and definitive closure of the investigation “.

“We have not been fighting this fight for almost three decades to settle for a promise of justice that will never come., and that in the long run it will end up being harmful. That is our mandate, that is our claim: to get to know the whole truth, not just fragments, and in the same way, to obtain an unquestionable Justice, “he stressed.

In the final section of his speech, he expressed: “After twenty-seven years it is exasperating to feel the need to reiterate that if the AMIA cause is still present on the national and international agenda, it is purely and exclusively due to the effort and tireless commitment of the central institutions of the Jewish community and the families of the victims. “

“Let it be understood very clearly: on this side you will not find those who fear the truth. On this side are those of us who for twenty-seven years have struggled day after day to find it. On this side, and together with a society that does not tolerate any more lies or disrespect, we say once again that the powers of the State, and not the victims, are the only ones responsible for the networks of ineffectiveness, corruption and cover-up that prevent us get to justice “, he sentenced.

Under the slogan “Connected against impunity”, the act began this Friday at 9:53 am – the exact time in which the attack on the building on 633 Pasteur Street was committed -, two days before the anniversary to “promote a greater participation of society “, as explained from AMIA.

Organized jointly by the AMIA, the DAIA and the Victims’ Families, the event can be followed on YouTube (https://bit.ly/AMIA27 years) and Facebook, through the official AMIA account.

As every year, the sound of the siren formally began the act, after which they mentioned the names of the 85 people who lost their lives in the attack, and share brief and emotional testimonies of 12 surviving victims and 27 relatives of victims fatal.

In addition, the public participates in the commemoration through photos that they were sending (through a website and through the social network Instagram), to which a filter designed especially for this anniversary was applied.

On Wednesday, the head of AMIA met at Casa Rosada with President Alberto Fernández, who did not confirm his participation in the tribute ceremony, to “review agenda items.”

“We talked about how the AMIA cause is still a pain for Argentine society and what we can do in order to apprehend those who are accused of being responsible,” Eichbaum told the media accredited in the Government House, including Clarion.

Eichbaum demanded this Tuesday that the Justice appoint with “urgency” a head to the court that is leading the case for the attack perpetrated at its headquarters in 1994, warning that “this situation helps so that nothing progresses.”

“Twenty-seven years it hurts us to have to repeat that for the attack on the AMIA there is not a single person convicted. The Special Prosecutor’s Office has not produced new or valuable information for a long time. On the other hand, Federal Court No. 6, a charge of the case, has not yet appointed a judge permanently, “Eichbaum warned, in statements to Clarion.