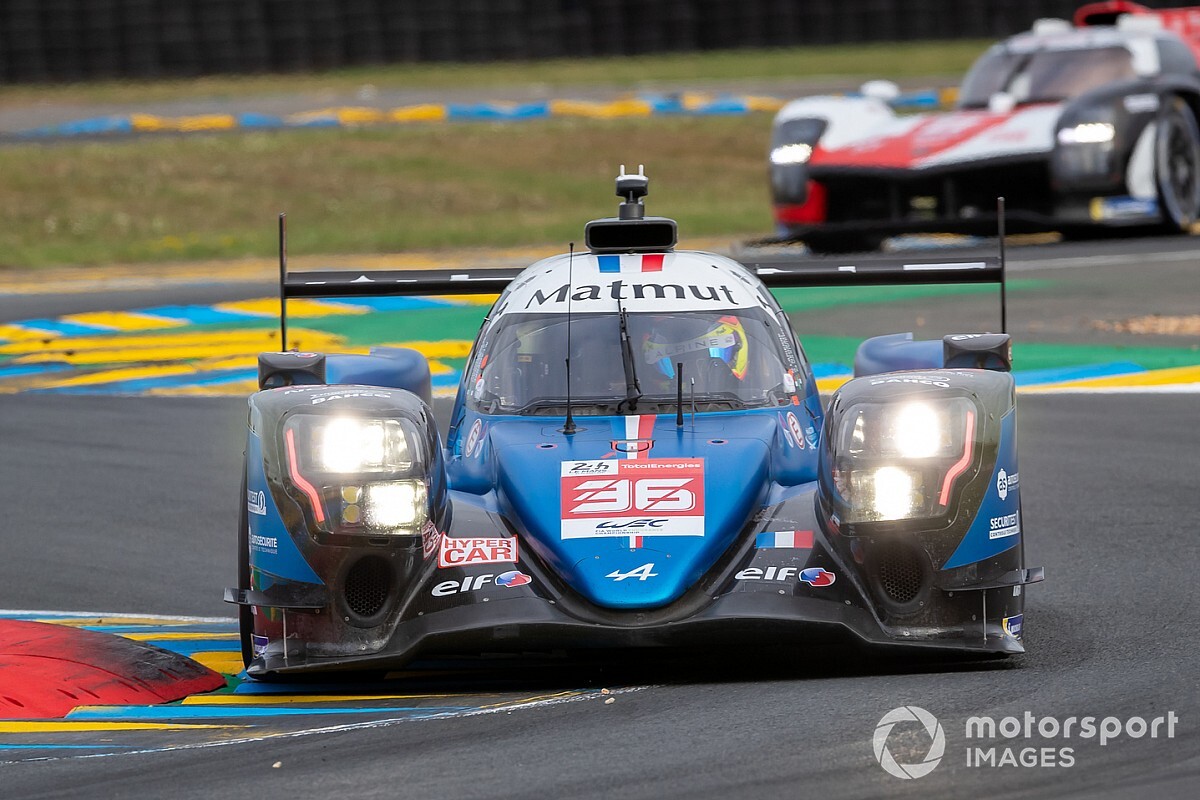 Alpine ringing at the conclusion of Free Practice 2 of the 24h of Le Mans, with the protagonists of the FIA ​​WEC who have covered the 13,626km of the Circuit de la Sarthe preparing the last things for the assault on the Hyperpole, where we will see the Top6 in each category emerged from the Qualifying last night.

4 ‘from the end, the A480-Gibson LMP1 # 36 driven by André Negrão / Matthieu Vaxivière /Nicolas Lapierre took the lead with a great lap in 3’26 “594, overtaking Kamui Kobayashi’s Toyota GR010 Hybrid # 7 /Mike Conway/ José María López and # 8 by Sébastien Buemi / Kazuki Nakajima /Brendon Hartley. Subsequently thrill for Lapierre, who turned in “Indianapolis” stopping a few meters from the wall, when the tests were over.

Among other things, just before, the Toyota # 8 had ended up on the wall in the same position, hitting the rear after a mistake made by Nakajima, which in fact prevented him from being able to return to action, losing the rear wing and ruining the diffuser. .

In this session there was no lack of other interruptions, with the greatest thrill experienced by Dwight Merriman, braking on the dirt at the “Chicane Dunlop” losing control of his Oreca # 17 and crashing violently into the right barriers. The Idec Sport driver came out unscathed, but the Race Direction waved the red flag to fix the protections.

Almost identical fate for Juan Pablo Montoya, who impacted head-on in the same point, still coming out unscathed from the wreckage of the Oreca # 21 of the DragonSpeed ​​USA, but with a consequent red flag.

A mistake made by Giedo Van Der Garde at “Mulsanne” saw the rider of the Nederland Racing Team collide with his Oreca # 29 the LMP2 # 48 of Idec Sport, sending both of them into a spin, while the other Dutch driver, Frits Van Eerd, he turned to the “Chicane Dunlop” staying planted in the escape route on the left.

Problems for the Oreca # 1 of Richard Mille Racing, which remained stationary halfway through the track with the engine broken down, as well as the # 30 of the Duqueine Team that René Binder found himself stopping at the entrance to the pit lane causing the Slow Zone.

Finally excursion in the gravel with a blow to the rear also had by the Corvette # 63 of Chevrolet Corvette C8.R, # 63 of Antonio García in the braking that leads to the “Porsche Curves”, but the Spaniard managed to restart without major problems, regaining the pits .

Returning to the ranking of the times and completing the speech of the Hypercar Class, fourth is the Glickenhaus 007 LMH # 708 by Franck Mailleux /Olivier Pla/ Pipo Derani, while the 007 LMH # 709 of Ryan Briscoe/ Romain Dumas / Richard Westbrook is fifth in the lot, but far behind in the general classification and with fewer returns, also due to a problem with the Pipo engine.

In LMP2 it is again the Oreca 07-Gibson # 38 of the Jota (Roberto Gonzalez /António Félix Da Costa/ Anthony Davidson) to put the exclamation point on the list, with the 3’30 “213 mocking the two United Autosports cars with the # 22 of Filipe Albuquerque / Phil Hanson /Fabio Scherer second and # 23 of Paul Di Resta/ Alex Lynn / Wayne Boyd third.

Top5 also for Panis Racing with the Oreca # 65 of Julien Canal / Will Stevens /James Allen, which is held behind the two of Team WRT, # 31’s Robin Frijns/ Ferdinand Habsburg / Charles Milesi and # 41 by Robert Kubica /Louis Delétraz/ Yifei Ye.

Good improvement for Risi Competizione, finishing seventh with Ryan Cullen’s Oreca # 82 /Oliver Jarvis/ Felipe Nasr, ahead of DragonSpeed ​​USA # 21 (Henrik Hedman /Ben Hanley/ Juan Pablo Montoya) who despite the accident is the best of the Pro / Am.

Porsches fly in the LMGTE Am class too, with four 911s soaring. The best is # 88 from Dempsey-Proton Racing (Julien Andlauer/ Dominique Bastien / Lance Arnold) in 3’50 “167, then there is the # 56 of Team Project 1 (Matteo Cairoli/ Riccardo Pera / Egidio Perfetti), the # 77 of Dempsey-Proton Racing for Christian Ried / Jaxon Evans /Matt Campbell and the # 99 Proton Competition branded with on top Harry Tincknell/ Florian Latorre / Vuttikhorn Inthraphuvasak.

The Aston Martin Vantages continue to hide: the first Vantage is only 11th in the group with Ben Keating / Felipe Fraga /Dylan Pereira (# 33 TF Sport), pulling behind the # 98 of NorthWest AMR (Paul Dalla Lana / Nicki Thiim /Marcos Gomes). Accident at the end instead for the # 95 of TF Sport.

The Hyperpole will take place at 9.00 pm, with the teams choosing one driver per car to take to the track in the 30 ‘available to play for the 24h Pole Position.

Recipients of new payments to Russian pensioners have been clarified