24 hours with the candidate (1): Edmundo Bal, the implacable planner 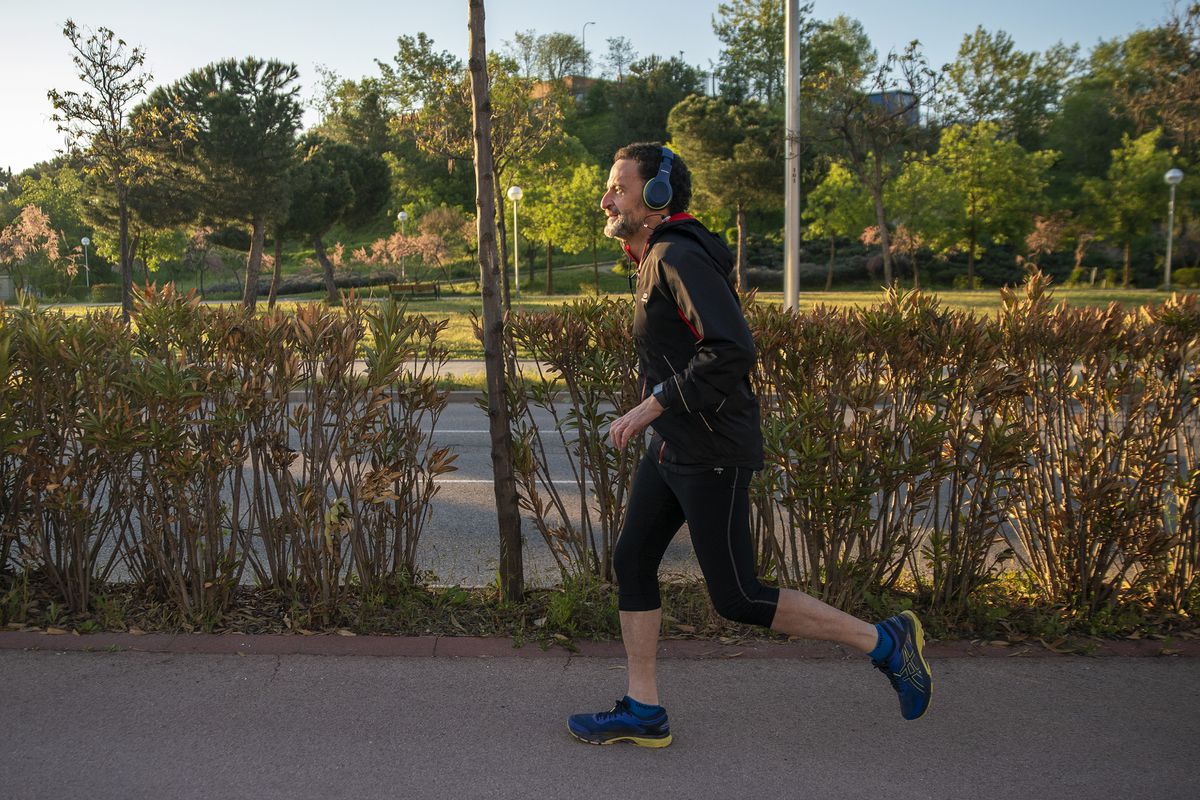 Edmundo Bal takes a spoonful of Nocilla at eight in the morning. He prepares a coffee with milk. He puts on black tights and goes for a 10-kilometer run around his house, a two-story brick house located north of Madrid, very close to the limits of the Mirasierra neighborhood, a bastion where the PP almost touches always 50% of the votes. “I run because it makes me very energetic for the rest of the day.” A routine that has hardly changed in recent years. He does not do it alone. He is accompanied by Chuck Berry, Loquillo and Mick Jagger. 700 songs that he himself has chosen for his Spotify list:

“Did you see Ayuso run the other day?”

―Each one has his own style.

After a shower, a coffee and a banana, a driver and two members of your press team await you at 11.00 in the Edmundoneta, a black eight-seater Mercedes van that the party has named for the campaign. Election day starts at 11:30 am with an event at the Teatro de La Latina, where it will announce a free annual subscription of 100 euros for young people up to 26 years of age to go to cinemas and theaters in Madrid. “I am a very Germanic guy. I like to plan everything ”.

From Huelva, he confesses during the journey that passes from the sea. “I have dated my grandmother and I don’t like it.” He owes his name to his grandfather, who was born on Saint Edmund’s Day. There are four in his family. Him, his son, his cousin and his cousin’s son. There is no Christmas without the four of them taking a picture. He says that back in 1970, his parents landed with him and his two brothers in the Moratalaz neighborhood, when he was only a seven-year-old boy. “If a big problem has to be solved in the ministry,” his father once told him, “the state attorneys solve it. Try it”. In two years he removed the opposition. The mean is four.

―You have to see Almeida …

Esther Ruiz, number two of his candidacy, receives him like this when he arrives at La Latina. Citizens’ WhatsApp chat fumes on Saturday with an interview from the mayor of Madrid in Abc, where they throw things at her: “I think she is very attractive,” says José Luis Martínez-Almeida. “I’ll talk to him,” Bal responds to Ruiz sarcastically. The Ciudadanos candidate has known the capital’s councilor for more than 20 years. “I’m like the godfather of his class, I get along very well with everyone.” Once a year they go on a weekend trip to a European capital. Suddenly, a middle-aged couple stops short at the scramble of cameras at the theater doors: “Who is this?” She asks. “The Bal that,” he replies. The candidate, a few meters away, dismisses the press. The act ends. He has to be in Chueca in ten minutes.

—At home we used to watch 7 lives, but we were more of Javier Cámara.

—Well, there they gave him slaps …

Bal arrives at the Mercado de San Antón at noon. During the walk, the owners of the greengrocers, bakeries and patisseries look for his photo with the vice mayor of Madrid, Begoña Villacís, who has just arrived and is very devoted to the campaign. “This is ostrich meat,” the market manager at a butcher shop tells them. Villacís turns a deaf ear. He prefers to show off the achievements of Citizens in the City Hall. A vote for the party is worth more than any wild animal. The market manager, restless, cuts off the conversation again: “Excuse me, Begoña, this is a Vianese breed of meat.” Bal, courteous, enter the rag. The manager is still a vote. “I am very carnivorous!” Her family says she cooks yummy.

In campaign everything is scheduled. At 2.30 pm, the Edmundoneta reaches the bars on the street of Ibiza. Here a Citizens tent awaits you. Two retirees greet the deputy mayor. “I am Edmundo’s father-in-law. You are taller than on TV! ”. Villacís bumps his elbows. The father-in-law guarantees them the vote, in his own way: “Begoña, the best politicians in Madrid are this man – points his finger at his son-in-law – and the mayor.” Bal is laughing.

His wife, a lawyer whom he met in a law class in Complutense more than 30 years ago, and his son, Edmundo, a Hispanic Philology student who has inherited his curly hair, have also come to the walk. the vote: “I will not vote for my father. I am going to abstain. You know that I have never met him politically ”. His mother, upon hearing it, quickly approaches and at least guarantees the victory of Ciudadanos en la familia: “I do, eh.” Bal eats with them daily, except during the macro trial of the Gürtel case, I only saw them at dinner. “It was a very tough year for him,” his wife recalls. “It came at night. He would eat dinner and go to bed ”. This Saturday they had some steaks with potatoes at home for lunch.

At 4:00 p.m. he disconnects. He takes his Harley Davidson out of the garage and takes a walk around his neighborhood. Came back. He is optimistic. Tell an anecdote. He says that one morning in May 2018 Gerard Piqué was hiding in a bright room of a new law office in the center of Madrid. He, a renowned state attorney, had been invited to the inauguration through a magistrate. He knew nothing of the surprise guest. A year earlier, the Barça footballer made a statement after a Spain-France match. He pointed out, among other things, that the people who had accused Messi and Neymar of tax fraud against the Treasury sat next to Florentino Pérez in the Bernabéu box. Bal was one of those people and he had never been to that stadium. After those statements, the lawyer wrote a hard article in The confidential: “Mr. Piqué, Messi’s taxes are needed for roads and hospitals.” The Catalan lawyer who opened the office where the footballer was a year later received him with a hug: “Edmundo, I have a surprise for you. Don’t be scared when you open that door ”. It did not give credit. There was a giant sitting on a chair:

“Did I screw up?” Asked the footballer when he saw him.

And they hugged each other. Months later, Piqué sent him a picture framed with the net from the last game that was played at Vicente Calderón. “He’s a great guy,” says Bal – from Atleti – after telling the story for the first time. 53 years old, this lawyer is a state animal. Four years ago he also put Cristiano Ronaldo on the bench for a tax offense. Three years ago, being the head of the criminal department of the State Bar, he pronounced a sentence wrapped in a black robe in the trial of the PP Gürtel plot:

“May you please, Your Honor, this is practically a cancer of corruption.

And he asked for an exemplary sentence so that Spanish businessmen would not be tempted to bribe a politician. Bal now faces the final judgment of Ciudadanos in Madrid. Sustain or suddenly lose 26 deputies. Or zero or seven seats, according to all the polls. Born optimist, he accepted the last challenge of the match that signed him in March 2019; months after he refused to sign a report from the State Bar that called for sedition and non-rebellion – with more jail time – for the separatists in the trial of the you process [referéndum ilegal y declaración unilateral de independencia]. After his rejection, the Government of Pedro Sánchez immediately dismissed him. Bal was an unknown guy with a reputation for being a progressive in the guild. That day he opened all the newscasts. The lawyer José María Fuster Fabra, a friend of Albert Rivera’s father and who had faced him harshly in numerous trials, called the then leader of Ciudadanos by phone: “Albert, don’t let this guy escape. Is very good”.

Rivera quickly grabbed the phone: “Edmundo, come to the Citizens headquarters.” It was a short meeting, without any agreement. A little groping. Weeks later, Sánchez brought the general elections forward to April 2019. Bal’s phone rang again:

“I’m Albert, do you come on the list and we do the campaign together?”

After recalling the story, he says he has no regrets. The Edmundoneta reaches the last act. 19.30. Opera Square. At around 8:13 PM, Inés Arrimadas smiles at a guy in the front row. A 53-year-old man, small, with an aquiline nose, a white shirt that matches his three-day beard, and a very tight black jeans, opens his blue eyes when he hears his name five times. The man, firm, climbs four steps of a small orange stage at the doors of the Royal Theater. 200 people wave flags of Spain and Europe under a climate of melancholy and hope. The microphone is adjusted. Take air. And he launches: “My name is Edmundo Bal and I want to be the next president of the Community of Madrid.”

At the age of 47: Moderator Jan Hahn died