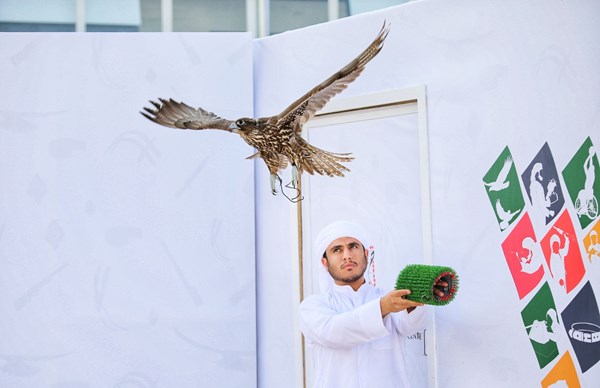 The Championships Department at the Hamdan Bin Mohammed Center for the Revival of Heritage launches the Cup of His Highness Sheikh Mohammed bin Rashid Al Maktoum for Falcon Races, “the former Pride of Generations Championship”, in the center’s field in the Al-Ruwayyah area, from January 30 to February 15, and it is one of the most important and largest falconry tournaments At the level of the country and the region, due to the high level of the participating falconers, in addition to the value of the prizes amounting to 23 million dirhams.
The cup will be held with the participation of more than 3,000 birds and more than 700 falconers, with a total of 100 rounds, with 20 rounds for the sheikhs category, 28 rounds for the general open category, 28 rounds for the public owners category, 10 rounds for the heat and peregrines category, 8 rounds for the junior category, and 4 rounds for the elite. , 2 runs for the cup.
The falcons that won the first three positions qualify in the symbolic rounds and the main rounds of the competition, within the elite rounds that will start next February 14, and precede the cup rounds for the sheikhs-public categories “Open Gernas”, and the public category owners “Farkh and Jernas”, and the cup runs for the sheikhs and public categories are open. A “chicken”, where one million dirhams were allocated to the Sheikhs’ Cup, and the same amount was allocated to the public cup, open to participation in the cup runs on the closing day of the event.

Rashid Al-Khasouni, Director of Championships Department at the Hamdan Bin Mohammed Center for Heritage Revival, said: We are fully prepared for the launch of the largest Fazza Championships for falconry, and dearest to the hearts of all, especially as it bears its new name, “The Cup of His Highness Sheikh Mohammed bin Rashid Al Maktoum for Falcon Races.” The center redoubled efforts to produce the tournament in a manner befitting its name and status.
He added: Our message and our goal is to preserve our authentic national heritage, and the sport of falconry is one of the symbols of our heritage, so it receives attention from everyone. Our kids.
The management of the tournaments at the Hamdan Bin Mohammed Center for the Revival of Heritage, with the Organizing Committee for the Fazza Championship for Falconry, concluded various preparations and preparations for the Cup, introducing the latest technologies and methods in organizing the event, supporting the participating falconers and facilitating all procedures for them, with the increasing demand year after year to participate in the tournament. From inside and outside the country.
Demithan bin Suwaidan, Chairman of the Organizing Committee for the tournament, said that the field is fully prepared for the launch of the tournament, which bears a name that everyone seeks the honor of participating in, given the moral meanings it carries for the falconers who write their names of gold in the record of this precious cup.
And he noted that the arrival of the number of birds to 3880 birds and 770 falconers has great indications of the importance of the event, and he expected that the excitement would be present in all stages with the value of the prizes reaching this large number.