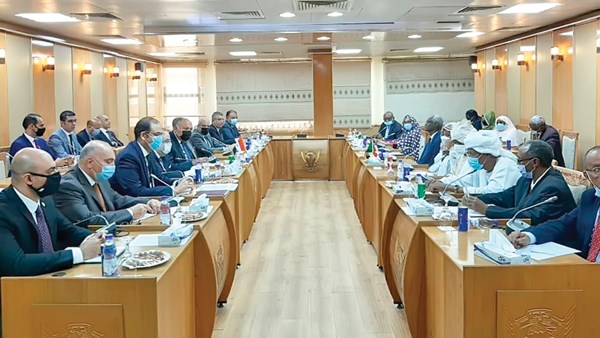 Egypt and Sudan warned of serious risks and dire effects of the second unilateral filling by Ethiopia of the Renaissance Dam without reaching a legal agreement with the two countries, and stressed the importance of concerted efforts of the international community to resolve the crisis.
A bilateral statement issued by the two countries during the visit of the Egyptian Ministers of Foreign Affairs, Irrigation and Water Resources Sameh Shoukry and Mohamed Abdel-Aty to Khartoum yesterday, said that Ethiopia does not take into account the water interests of the two countries.
The two Egyptian ministers held an expanded session of talks with their Sudanese counterparts, Minister of Foreign Affairs Mariam Al-Sadiq Al-Mahdi, and the Sudanese Minister of Irrigation and Water Resources, Yasser Abbas.
The joint statement said that the expanded discussions between the ministers in the two countries took place with the participation of technical and legal experts from both sides, and that they took place in a friendly and positive atmosphere characterized by mutual understanding, and the consultations focused on the developments of the Renaissance Dam file, where the two parties agreed on the serious risks and dire consequences of the unilateral filling of the dam. They stressed the importance of coordinating the efforts of the two countries at the regional, continental and international levels to push Ethiopia to negotiate seriously and in good faith, and with real political will in order to reach a comprehensive, just and legally binding agreement on filling and operating the Renaissance Dam, after the negotiations sponsored by the African Union reached a dead end due to Ethiopian intransigence.
The joint statement added that the visions of the two countries agreed on the need for coordination to move to protect security, peace and stability in the region and the African continent, which requires active intervention by the international community to ward off risks related to Ethiopia’s continued pursuit of its policy of seeking to impose a fait accompli on the downstream countries, and its unilateral will. Which Ethiopia continues to follow, which is embodied in its announcement of its intention to fill the Renaissance Dam during the next flood season without taking into account the interests of Egypt and Sudan.
The Ministers of Foreign Affairs and Irrigation in Egypt and Sudan expressed deep concern about the potential effects and damages of filling and operating the Renaissance Dam unilaterally and without a binding agreement regulating the work of this huge dam, stressing the importance of concerted international efforts to reach a settlement of the Renaissance Dam crisis, taking into account the interests of the three countries and achieving their interests. common.
Well-informed sources in Cairo and Khartoum told Al-Ittihad that officials in Cairo and Khartoum will intensify their efforts to put the facts surrounding the Renaissance Dam file in all its dimensions before international capitals and the international community, to put the world before its responsibilities towards ensuring the security and stability of this vital region of the world, the Nile Basin region and the Horn of Africa. And that the Egyptian and Sudanese sides agreed on the need for intensive joint action at the African and international levels to prove the danger of Ethiopia’s unilateral actions.
The sources added that the Egyptian delegation carried a proposal for coordination between the two countries in the file of the Renaissance Dam to exchange information on the status of the Renaissance Dam, and that the two parties agreed on the need for an international committee to assess the damages of the second filling, and that close Egyptian-Sudanese meetings will take place with American and European officials on the Renaissance Dam.
Sudanese Prime Minister Abdullah Hamdok had previously warned of the direct threat posed by the unilateral filling of the Renaissance Dam on the operation of the Roseires Dam, and on irrigation projects, power generation systems and citizens on both banks of the Blue Nile.
Hamdok stressed Sudan’s rejection of the unilateral filling of the Renaissance Dam, without reaching a binding legal agreement, and the meeting approved the plans and programs of the negotiating team and the Ministries of Foreign Affairs and Irrigation to use all legal means before the various regional and international legal and justice bodies to defend Sudan’s legitimate interests, national security and ability to plan and organize Using its water resources for the benefit of its people. Hockey The Swedes were outraged by the lion defender’s fall in the World Cup semi-final: “I think he will be ashamed later”