200 buildings on fire in Siberia, Russia 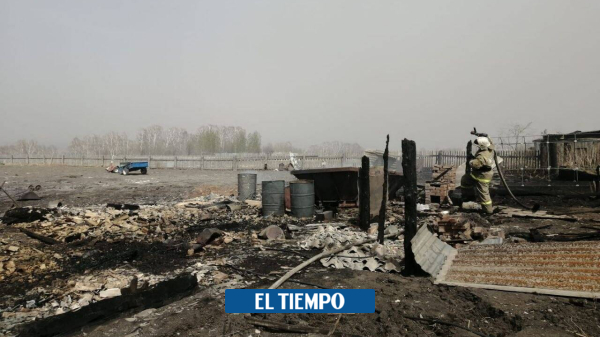 At least five people have died in the Krasnoyarsk region of eastern Siberia in numerous fires, aggravated by strong winds and still active, affecting hundreds of buildings, said local authorities who declared a state of emergency on Saturday.

“The fire spreads through more than 16 inhabited regions and some 200 buildings, including several sawmills and a childcare center, are on fire. There are several dead already,” said the Ministry of Emergency Situations of this region, in the Telegram application.

So far five deaths have been recorded.

The authorities described the situation as “difficult” and established a state of emergency in the region, specifying that around 300 people and more than 90 vehicles are involved in extinguishing the fires.

“The task is complicated by weather conditions, as strong winds accelerate the spread of the flames and prevent their extinction.“, added the local ministry.

After an emergency meeting, the governor of the region, Alexander Uss, specified in a statement that the fires were caused by winds that in some regions reach 40 meters per second, compared to the 25 m/s forecast.

See also  Has 'Borgen' changed or has politics changed?

This wind caused “trees to fall, overlaps and power lines to fall”, as a result of which “fires were declared simultaneously in numerous areas of the Krasnoyarsk Territory”.

The task is complicated by weather conditions, as strong winds accelerate the spread of the flames and prevent their extinction.

Winds are expected to remain at this intensity for “at least 4 to 6 hours,” the governor’s office said.

“We have asked our neighboring territories for help, but we are aware that, in the best of cases, this will not happen for a few hours,” Uss said.

“I have given the order to cut off electricity in a part of the territory of the region, except for survival facilities, gas stations and water supply systems,” he added.

In the most affected areas, “temporary shelters will be opened and people will receive medical and psychological assistance”.

In 2021, fires, especially in the eastern Russian region, released 16 million tons of carbon (the fourth highest volume since the start of measurements in 2003), according to the annual European climate report.

Sweden and Finland on their way to NATO: accession in May?