2.6% increase in the contribution of the cultural and creative industries to Dubai’s output 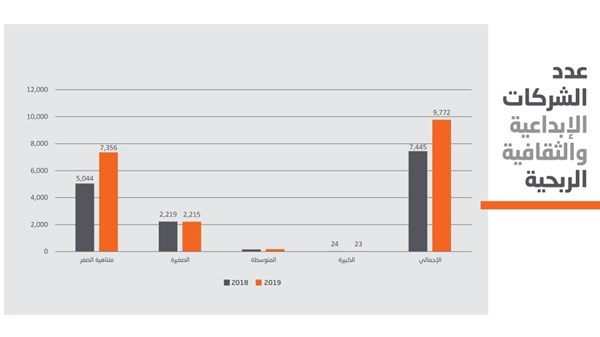 Dubai (Etihad)
The contribution of the cultural and creative industries to Dubai’s GDP increased from 2.6% in 2018 to 2.7% in 2019, which confirms Dubai’s continuous interest in its wise leadership to advance this vital sector in shaping the features of a knowledge-based future economy, according to a statistical study of the reality The creative economy in the Emirate of Dubai was conducted by the Dubai Culture and Building Authority in cooperation with the Dubai Statistics Center.
“Under the leadership and directives of Her Highness Sheikha Latifa bint Mohammed bin Rashid Al Maktoum, President of Dubai Culture, and based on a statistical study of the reality of the creative economy in the Emirate of Dubai, the authority confirmed that the creative economy (or what is universally called the orange economy) represents A key priority not only in the recovery phase of the consequences of COVID-19, but also for the decades to come.

Hala Badri, Director General of the Culture and Arts Authority in Dubai, explained that the creative economy covers a range of knowledge-based economic activities that form the backbone of cultural and creative industries, and that have an impact on the economic system in general, and includes 6 main sectors, including natural and cultural heritage, books and journalism, performing arts and celebrations, audio-visual and interactive media, visual arts and crafts, design and creative services; In addition to other fields that branch out from it.
The data and results of the study clearly and clearly show the success of Dubai’s strategy in attracting creative capital, skills and creative entrepreneurs, as the number of profitable institutions operating in the creative and cultural industries increased from 8,352 companies in 2018 to 9,772 companies in 2019, which in turn contributed to providing job opportunities. In this sector, there were 69,341 employees in 2018 and 75,998 employees in 2019, a growth of 9.6%.
In turn, the number of micro, small and medium companies operating in the creative industries reached 9,749 companies in 2019, or more than 99 percent of the total number of companies operating in this sector. This is an indication of the correctness of the authority’s strategic orientation towards supporting entrepreneurs and small and medium-sized companies, in addition to its emphasis on the attractiveness and qualitative work environment that the emirate provides to creative entrepreneurs, and thus the emirate’s ability to attract these skills, which will have a prominent role in supporting the local production of the creative economy in Dubai and the United Arab Emirates.
The Dubai Creative Economy Strategy and the development of Al Quoz Creative District as a first stage and the launch of other integrated creative areas in the Emirate in the coming years will have the greatest impact in supporting and enhancing the health of the sector’s performance, and attracting more creative companies, entrepreneurs and capital working in this field, thus achieving the strategic objectives aimed at Making the emirate a global center for culture, an incubator for creativity, and a forum for talents from all over the world and in various fields of creativity.
As for production, Badri indicated that 2019 witnessed an increase in production, that is, in the value of the final products of goods and services produced by cultural facilities to become available for use outside the facility, in addition to goods and services produced for the purposes of self-use, reaching 22,251. 867,968 dirhams, compared to 20,836,654,001 dirhams in 2018, where the largest share of the design and creativity services sector, with an output of 15,624,679,843 in 2019, compared to 14,031,645.713 dirhams in 2018.
By analyzing the value-added and consumption data, it was found that the books and press sector were the most promising creative fields, with a percentage of about 48 percent between the two values, which indicates the correct performance of this promising sector and the need to invest in it and work to strengthen it.
With the launch of the Dubai Creative Economy Strategy, the authority is keen to preserve the health of the creative economy, especially during the recovery phase of the pandemic, in order to continue achieving continuous growth over the coming years, thanks to the comprehensiveness of the strategy, in addition to the facilities that the Emirate of Dubai provides to all sectors. The creative economy, based on the belief of its wise leadership in the necessity of directing and supporting these industries, because of their bright future and an important role in shaping the features of the future economy on a large scale.
Hala Badri indicated that the Dubai Creative Economy Strategy aims to increase the number of creative and cultural companies and institutions to 15,000 companies, providing 140,000 jobs in the various sectors of the creative economy, by 2026, and the contribution of the creative economy to 5% of the emirate’s GDP with grant facilities The long-term cultural visa is for creators who wish to establish their business in Dubai.