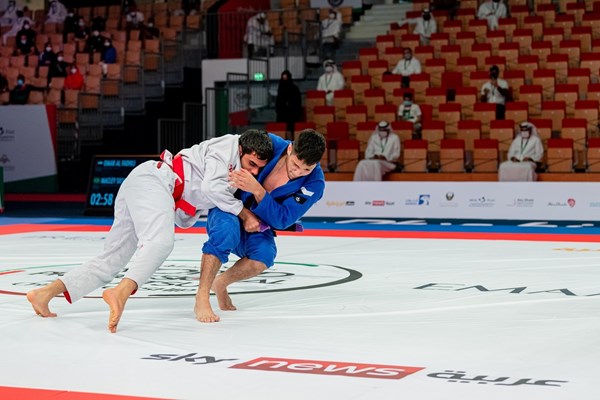 Mustafa Al Deeb (Abu Dhabi)
The 12th edition of the Abu Dhabi World Professional Jujutsu Championship will be concluded tomorrow, Friday, which was hosted by the Jujitsu Arena in Zayed Sports City for four days, under the patronage of His Highness Sheikh Mohammed bin Zayed Al Nahyan, Crown Prince of Abu Dhabi and Deputy Supreme Commander of the Armed Forces.

For his part, Youssef Abdullah Al-Batran, Board Member of the Jujitsu Federation, thanked His Highness Sheikh Mohammed bin Zayed Al Nahyan for his gracious patronage of the championship, praising the absolute support that jujitsu enjoys from the country’s wise leadership, and affirming the Federation’s keenness to continue work to consolidate the presence of the game At the state level, especially since the name of sport has become associated on the global level with the name of the capital, Abu Dhabi. He said: We are pleased today to launch the professional competitions in the blue and purple belts, which is the category that we consider the most important reservoir for the brown and black belt stars, and added: Given the high-level performance levels shown by the players, we can confidently look forward to the brown and black belt competitions on Friday, to culminate with it activities Abu Dhabi World Professional Jiu-Jitsu Championship, and we conclude a new line in the march of successes of Jiu-Jitsu sport in the UAE.

Al-Batran added: The success in organizing the event is a continuation of the approach of our country, which has mastered the challenges and turned them into opportunities, as we did not view the challenges of the pandemic as an obstacle to the path of achievement, but rather as an opportunity to demonstrate our ability to innovate and succeed, as we were able to gather Jujutsu champions from different parts of the world on one carpet. At the same time, we provided the ideal platform for the people of the country to rise to the world.

The trainer wants to leave: Flick terminates the Hoeneß system