100 players in the “Mother of the Nation” Jujitsu League 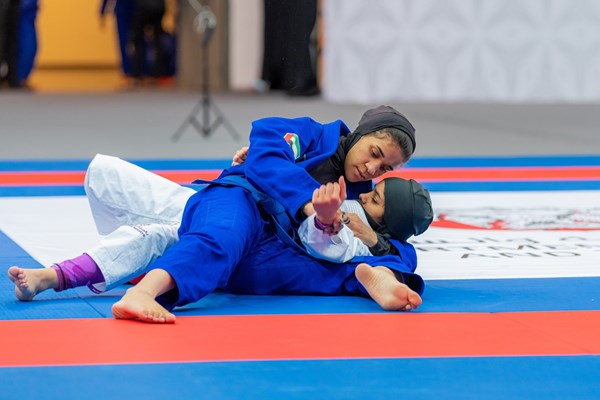 Abu Dhabi (Etihad)
The Ju-Jitsu Arena in Zayed Sports City in Abu Dhabi will host next Thursday, the fourth and penultimate round of the Mother of the Emirates Ju-Jitsu League, with the expected participation of more than 100 players from within the country, most of whom are professionals on the local and international arena.The fourth round of the tournament will witness competitions in three categories. These are female youth (under 16 years), young women (under 18 years old), and adults (over 18 years old).

The chances of Al Wahda, Al Ain, Al Jazira and Sharjah martial sports clubs and the Palms Sports Academy Team 777 are great in standing on the podium after the strong performance during the past rounds, and their possession of all the elements of excellence and achievement in the tournament.

Mubarak Saleh Al Menhali, Director of the Technical Department of the Jiu-Jitsu Federation, said, “The penultimate round of the Mother of the Nation League is of special importance, as it constitutes the features of the hero for this dear championship in its new form, and without doubt the championship since its inception has fulfilled all its promises, especially in terms of turnout for Participation in it, the intensity of the competition and the classy performance that the players showed on the rug.”

Al Menhali explained that the Mother of the Nation Jiu-Jitsu League is a key contributor to preparing a generation of female athletes who are able to represent the country in an honorable manner befitting its position on the global jiu-jitsu map. UAE players have proven their heels on the rug during previous tournaments, and have succeeded in raising the country’s flag in many international forums.

He continued, “Continuing to organize tournaments during the summer period confirms the Federation’s keenness to help players to maintain high levels of physical fitness and readiness, especially that the coming period will be full of local and international championships, in light of the attention directed to the capital of Jiu-Jitsu Abu Dhabi, which will host the 13th edition of the World Championships.” Abu Dhabi World Professional Jiu-Jitsu Championship.

The player, Shamma Al Balushi, from the Sharjah Self-Defense Sports Club, who competes in the under-18 category, said that the club did well in the first three rounds, due to the enthusiasm of the club’s players and their strong desire to achieve the championship title, and returned the favor to The club that provides them with all the ingredients to win and develop in Jiu-Jitsu.

She added, “We are close to achieving our goal, and we will make sure to provide a strong performance that will ensure that we continue to compete until the last metres.” In turn, the player Maryam Hamad from Al Ain Club, who competes in the under-18 category, said: The Al Ain club’s players realize the importance of this round in drawing the features of the champion, and they will be keen to present a convincing performance on the rug and achieve a well-deserved victory.

She added that the technical staff of Al Ain Club works closely with the players to develop the appropriate educational programs that qualify them to compete and achieve achievements.