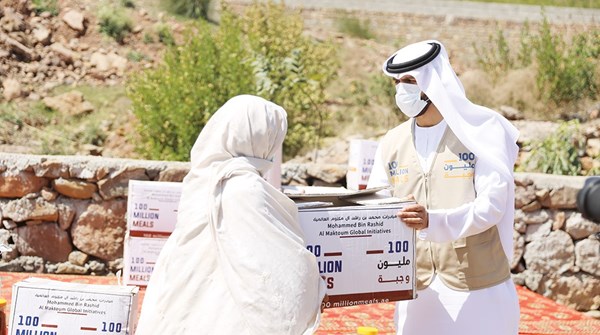 The 100 million meals campaign, the largest in the region to feed food during the holy month of Ramadan in 20 Arab, Asian and African countries, in the first week since its launch, has succeeded in collecting the equivalent of 78 million meals and achieving 78% of its goals to provide 100 million meals in lower-income communities through contributions Institutional and individual donations from various sectors.
Donations poured into the 100 million meals campaign since the first hours that followed the announcement of His Highness Sheikh Mohammed bin Rashid Al Maktoum, Vice President and Prime Minister of the UAE and Ruler of Dubai, may God protect him, to launch them with the aim of providing food support to needy individuals and families in 20 countries within a month. Ramadan.
In the first week since the start of the campaign, the total donations received exceeded half of the contributions required to provide the costs of providing food parcels equivalent to 100 million meals to the needy in the twenty countries covered by the campaign.

Values ​​of human solidarity
His Excellency Mohammed Abdullah Al Gergawi, Minister of Cabinet Affairs and Secretary-General of the Mohammed bin Rashid Al Maktoum Global Initiatives, said: “The registration of the 100 million meals campaign, 78% of the contributions it needs in the first week of its launch reflects the keenness of the UAE society in all its categories, institutions and economic and humanitarian sectors to Active participation in supporting the humanitarian work initiatives launched and implemented by the UAE to provide relief to the needy in various parts of the world.
His Excellency Al-Gergawi stressed that the campaign of 100 million meals that feed food and provide food support to those who deserve it comes at a time in the world in dire need for human solidarity, and the thought of His Highness Sheikh Mohammed bin Rashid Al Maktoum, may God protect him, represented in expanding the circle of charitable work that benefits people further Mada, and it involves everyone in achieving its goals and multiplying its direct positive impact on the lives of the underprivileged and needy.
He added: “We, in our role in the Mohammed bin Rashid Al Maktoum Global Initiatives, responded quickly to this influx of donations by starting the distribution of food parcels directly in a number of countries covered by the campaign, in cooperation with the Mohammed bin Rashid Al Maktoum Global Foundation, the World Food Program and the regional network of food banks to expedite. For the arrival of support to those who deserve ».

Social and institutional interaction
A week after its launch, the campaign recorded wide social and institutional interaction through digital platforms, social media and instant messaging applications, and produced a comprehensive charitable movement. The audience commended the campaign and its humanitarian goals, calling for intensive participation in it, as they exchanged the campaign video clip. The great interaction with the campaign reflected the values ​​of solidarity, generosity, compassion and solidarity rooted in the UAE society, which is keen in its various groups to extend a helping hand, relief and support the needy and the afflicted, spreading good, and mitigating the effects of crises, disasters, challenges and suffering for various peoples of the world without distinction between race, religion or region. The cash contributions of donors, including individuals, businessmen, companies, companies, commercial groups, the business community, governmental and private institutions, economic and charitable activities, and community and humanitarian work bodies from inside and outside the country, came in succession through the four donation channels designated by the campaign.

Zakat on money
Dr. Ahmed bin Abdulaziz Al-Haddad, the chief mufti of the Ifta Department in the Department of Islamic Affairs and Charitable Activities in Dubai, issued a fatwa permitting the payment of zakat in cash to buy food parcels and allocate them to needy individuals and needy families as part of the “100 million meals campaign”.
He explained that it is permissible to pay zakat in cash by purchasing meals and allocating them to needy individuals and needy families through the 100 million meals campaign aimed at feeding the hungry, saying: “We have to support this initiative as much as we can; Eat as much as he can, for there is food for the hungry, the poor and the needy. ”

Distribution operations
The 100 Million Meals campaign has already started distributing food parcels in a number of countries it covers, including Egypt, Jordan and Pakistan. While the campaign coordinates with the World Food Program to distribute 20 percent of food parcels in refugee and displacement camps in Palestine, Jordan and Bangladesh, the 100 Million Meals Campaign is also cooperating with the regional network of food banks in distributing food parcels to target groups in 13 of the twenty countries that Covered by the campaign, as an umbrella for food banks in those countries.

acceleration
This cooperation comes between the 100 Million Meals Campaign and the regional network of food banks, which was established in 2013 in the International Humanitarian City in Dubai as a non-profit organization, in order to accelerate the distribution process and ensure its commitment to the best standards and practices adopted in the delivery of food support to the target groups directly.
The partnership between the two sides includes providing the required logistical services to deliver food parcels to their beneficiaries in their locations in 13 countries: Egypt, Sudan, Somalia, Angola, Uganda, Ghana, Sierra Leone, Tunisia, Jordan, Mauritania, Lebanon, Iraq and Yemen, while it undertakes the Mohammed bin Rashid Al Maktoum Global Initiatives, the World Food Program and the Mohammed bin Rashid Foundation Al Maktoum Humanitarian and Charity Works covers the remaining twenty countries covered by the largest campaign in the region.

Accurate data
The 100 Million Meals Campaign is based on accurate, updated and integrated databases that lay the foundations for institutional and sustainable humanitarian work, and identify individuals, families, and groups most in need of food support in the countries covered by the campaign, and distributions of food parcels in the twenty countries are carried out simultaneously and directly to ensure access to the largest segment. Possible beneficiaries throughout the holy month of Ramadan.

The death of a citizen, an Arab woman and 3 Asians, in a collision of two vehicles in Al Dhafra