10 weeks after completing the vaccination in Chile and more than 1,200 in Venezuela 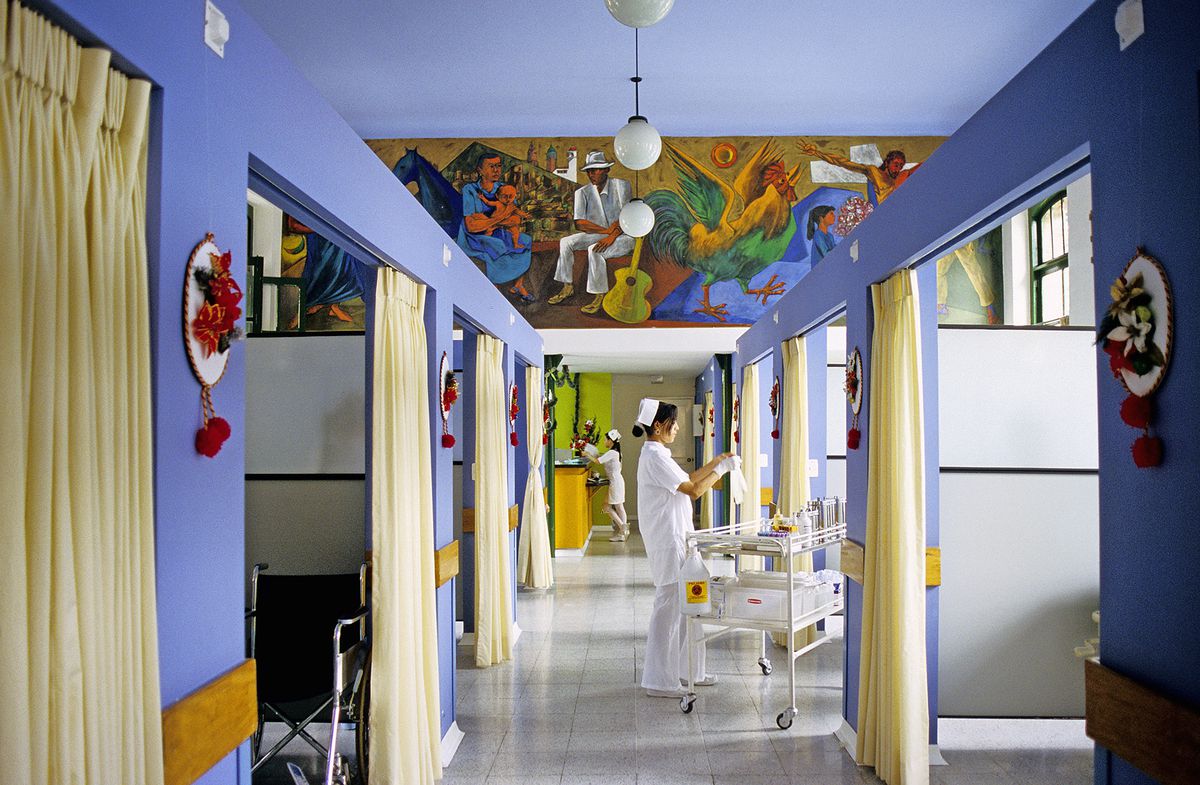 While some countries boast that they have already immunized a good part of their population, others have not even started because the vaccine is neither there nor expected. This is the case in many Latin American countries. The lack of injections and the inequity in their distribution, however, have rekindled the debate and the initiatives of civil society to liberalize pharmaceutical patents and thus facilitate a fairer distribution with mass production. One of the most determined voices in making the vaccine a global public good is that of the Avina Foundation, an organization that promotes sustainable development and the defense of democracies in Latin America, and that has set up a counter that follows the global immunization process and clearly shows the problem. Thus, while in countries like Chile it would only take 10 weeks to finish vaccinating its entire population, in others like Venezuela there are more than 1,200.

Gabriel Baracatt, Executive Director of Avina, explains: “Our region has 8% of the world’s population and 30% of those who died from covid-19. A pure market logic, of supply and demand, cannot prevail, because there are entire populations that will not be able to access the vaccine. We do not understand how a global problem does not have a global solution and we are condemned to depend absolutely on the decision of 7 or 10 pharmaceutical laboratories with a captive market of 7,000 million inhabitants “, he says from Bolivia, through a videoconference.

Avina wanted to reinforce her message and show her concern developing a data portal which monitors the global vaccination process, from the percentage of people who have received injections in each country to the rate at which the campaign is carried out, and calculates the number of weeks each State would need to immunize its entire population . For Baracatt, it was essential to provide a public information tool that helps to empower citizens to demand a more open, transparent and efficient process and that in turn dismantle the political use that is made of the drug and the manipulation of information. “The population of a country is told that 200,000 vaccines have arrived and its president receives them at the airport with all the honors, but you look at the scale and they are nothing in terms of the real need, because just look at the data counter to realize that perhaps that country would still have 150 weeks to go to achieve full vaccination, ”he criticizes.

A pure market, supply and demand logic cannot prevail, because there are entire populations that will not be able to access the vaccine “

And the fact is that Avina’s accountant offers data that, seen in perspective, produce some anguish. With cut-off in mid-April, taking into account that a year is 52 weeks, the table indicates that Chile would only have 10 weeks left to finish vaccinating its entire population. They are followed by Uruguay, with 11 weeks; Dominican Republic, with 36; Brazil, 38; Argentina, 50; Mexico, 53; Costa Rica, 72; and Suriname, 77. Colombia and Panama each have 85 weeks to go. The vaccinated population in this group of countries would currently be between 5% and 10%.

The situation of the rest of the nations of the region is more dramatic because all would need more than a hundred weeks to fully vaccinate their population, starting with El Salvador, with 124; Bolivia, with 156; or Ecuador, with 193. The worst unemployed would be Honduras, with 569 weeks; Guatemala, with 815; Paraguay, with 869 and Venezuela, with 1,219 weeks. In other words, if it follows the current rate of vaccination and vaccine distribution, this country would take 23 years to immunize its population. None have been able to vaccinate even 1% of their citizens. Their situation is comparable to that suffered by countries such as Kenya or Pakistan.

This is the panorama for Latin America reflected in this counter, which combines the data recorded daily by the page Our World in Data, from the University of Oxford, and the Johns Hopkins University. The figures show how countries such as the Seychelles, the United States, the United Kingdom or Israel will have their entire population vaccinated in three or four months, while countries such as Vietnam or Syria appear at the bottom of the row, which would take 288 and 673 years. respectively at the current rate.

In this context of limited capacity for the manufacture and distribution of vaccines, and considering the data as a whole, the Avina Foundation also denounces the hoarding by the richest countries. Juan Cristóbal Birbuet, developer of the tool together with Rafael López and who works in Avina as responsible for monitoring and evaluation, details: “There are confirmed purchases of 8,600 million doses, of which high-income countries have bought 53% ( 4.6 billion), but they only have 15% of the world’s population. So 85% of the planet’s population has acquired only 47% of the drugs. We have 12 countries that have purchased vaccines that far exceed their entire population. This leads to deep inequalities. It is not just about an ethical issue, but about efficiency to achieve herd immunity on a global scale, “he says via WhatsApp.

The accountant’s co-creator, however, is powerfully struck by the data the contrast between drug hoarding and the slow pace at which many of these countries are advancing. He gives an example to Canada, which says that it has signed agreements to purchase sufficient doses for more than 400% of its population, but in April it had only vaccinated 16% of it. It would take 54 weeks to complete the immunization.

There are confirmed purchases of 8,600 million doses, of which high-income countries have purchased 53%, but only have 15% of the world’s population “

Similar cases happen with Australia, New Zealand or the European Union. And the situation in Peru is also surprising, which without being a rich country managed to secure the purchase of doses for slightly more than its total population, but with its slowness in vaccinating it would take 465 weeks to do so. Birbuet has an impact: “We want this hoarding to be reduced so that the majority of the world’s population can access immunization.” “Going so slow, on the other hand, opens opportunities for new strains to develop that limit the effectiveness of vaccines,” he continues. “And it is that no matter how much a country has its entire population vaccinated, while the rest are not, it will always be susceptible to the virus continuing to be present and can mutate into new variants.”

For both Birbuet and Baracatt, a more equitable redistribution is necessary and that these countries cede a part of the guaranteed doses to the Covax mechanism, promoted by the World Health Organization (WHO) and the only global initiative that works to guarantee the availability of vaccines around the world. Precisely, and at a time when there is a strong increase in cases in countries such as Brazil, Colombia, Venezuela, Peru or Bolivia, Latin America has already begun to receive the 26 million doses of Covax committed until May. The goal is to be able to provide injections for at least 20% of the population of each participating country during this year.

Baracatt considers Covax a very good initiative, but insufficient. He insists over and over that there is no individual salvation and global solidarity is needed in a matter like this. “Either we go out together or we don’t go out, but no one is going to be able to go out alone. Israel, Chile or Canada are not going to solve the problem if they only vaccinate their population. We need all countries to have acceptable levels of vaccination and to strengthen global mechanisms like Covax. The decision must be based on an ethical conviction of the companies because, if not, the countries themselves will have to do it, as Brazil did at the time with HIV antiretrovirals ”.

No matter how much a country has its entire population vaccinated, as long as the rest are not, it will always be susceptible to the virus continuing to be present and to be able to mutate into new variants “

The pandemic has also shown the worst side of society, says the Avina manager. “Behind vaccination there is not only inequity, but also the political use of the vaccine as an element of discrimination, and there are many cases of corruption of people who skip the protocols to immunize their friends without any type of sanction” . Baracatt is also concerned about the inefficiency, ineffectiveness and lack of transparency of governments in the management of vaccination, as is the case in Brazil, whose president he points to as “a global threat”: “There is no type of coordination between the Federal government and the States, nor with the scientific community. The criteria in the handling of the pandemic are absolutely political ”.

Corruption and the political use of the vaccine are not the only limitations to speed up vaccination. So is the weakness of many of the existing health systems. “One of the great lessons that the pandemic leaves us is the need to strengthen health as a public good, given the total abandonment of many States of what were the public health systems. What this pandemic has ratified is that we continue to be the most unequal region of the planet in the world. It was shown that those with resources could access treatment in private clinics, while those who did not have them died in a hospital due to lack of oxygen ”, concludes Baracatt.

Russians described the devastating consequences of global warming for the country

Accounts by “Al-Ittihad” from within India: Symptoms of Corona sufferers are greater and more violent

Hockey With a lock, a great opportunity to pay off his debt, the goalkeeper game is emphasized