10 thousand dirhams fine for “memories” of traffic on mountain tracks 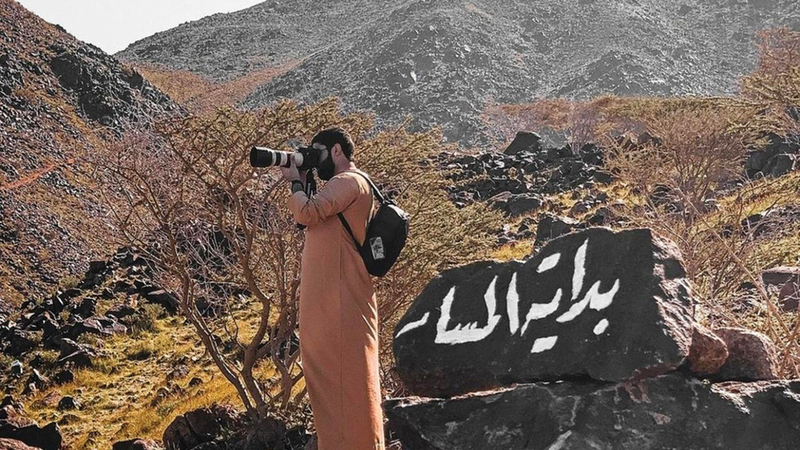 Some young men rush, with great enthusiasm, to write phrases on the white rocks, high in the mountains, using paint or spray cans, in preparation for taking a (self-) photo with the rock, with which they date the memory of crossing from the place.

Their expressions may be personal or patriotic, and reflect positive feelings toward national public figures, but this does not justify, from a legal point of view, hanging them on rocks as banners. Nor does it diminish the fact that it is an attack on the first features of the place, and an illegal act of what does not fall within private property.

For this, the Environment and Protected Areas Authority in Sharjah criminalized “deforming the mountainous areas in the emirate,” and enacted laws aimed at preserving their landmarks, including imposing a fine on “enemies of the environment” amounting to 10,000 dirhams.

A number of mountaineers in the eastern region confirmed that the sport of mountain climbing is witnessing an increasing number of residents and tourists, considering it a safe haven in light of the fear of infection with the “Corona” virus.

They stressed that the writing on the rocks represents a “visual assault” on the place, expressing their dissatisfaction with it, and the distortion of the pristine scenery.

They said that mountain-goers, both visitors and tourists, may not be able to take a suitable photo while in the area due to the presence of writings, names and drawings distorting the view around them.

Amna Mohammed Al Hammadi, a resident of Khorfakkan, stated that the mountains of the eastern region have become attracting mountain climbers and peaks, as well as camping and hiking enthusiasts, thanks to the breathtaking views and distinctive atmosphere they offer.

She emphasized that the paved mountain paths facilitated the sport of climbing in the mountains, which encouraged many to go towards it. However, some behaviors distort nature and the beautiful scenery that gives comfort to the soul from its purity, for example, attempts to draw or write on rocks.

Ms. Hajar Hassan, a resident of Khorfakkan, supported her in her opinion, saying that protecting the landscape requires enacting and applying a deterrent law against those who act as if the mountains are their private property, so that these behaviors that have a negative impact on the beauty of the mountainous areas are eliminated.

Hassan Al-Najjar, a resident of Khorfakkan, considered that his city has become a destination for domestic and foreign tourism, adding that “the attempt to distort this divine masterpiece deserves punishment.” He added, “The writings scattered on the rocks mean nothing except for those who wrote them, but they prevent us from finding ancient writings, which we sometimes find and open a great door to knowledge of history.”

For her part, Head of the Environment and Protected Areas Authority in Sharjah, Hana Saif Al Suwaidi, confirmed that the law prohibits drawings, writing and engraving on rocks, mountains and other natural formations in mountainous areas. It is also prohibited to move rocks or mountain plants from their place or change the features of mountainous nature.

She said that the law punishes violators with a fine of 10,000 dirhams, and the confiscation of the seized materials and tools used.

The violator shall also bear the costs of removing the damages he caused.

A source in the municipality of Khorfakkan, who preferred not to be named, confirmed that there are people who put flags and signs indicating their passage from the area.

He said that the work teams that identified the mountain paths took into account not to cut plants, or remove them, or distort the rocks in order to preserve nature in its first form.

He added that a can of paint worth 10 dirhams, or less, is enough to distort the features of nature in an entire area, considering that the best solution is awareness.

• Paved mountain paths facilitated the practice of climbing in the mountains, and encouraged many to go towards it.