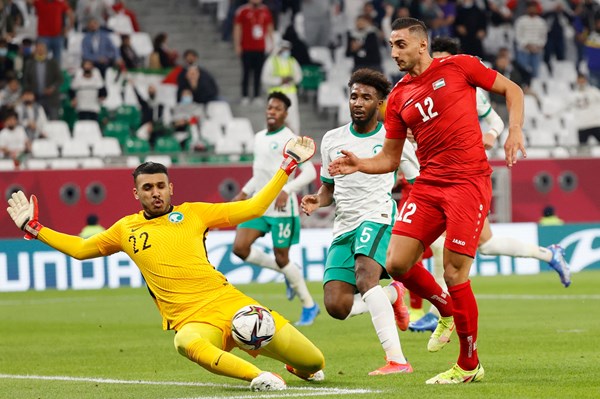 The fans are waiting for an exciting and exciting round at the end of the first round of the Arab Cup, after 4 teams have officially qualified for the quarter-finals, with the end of the second round, and 4 other cards remain, 10 teams compete for in the third and final round, Monday and Tuesday.
Qatar, Egypt, Algeria and Morocco have officially qualified for the Arab Cup quarter-finals, in return for Lebanon and Sudan officially leaving the tournament, which makes the last round take place according to complex scenarios to resolve the remaining four cards.
In the first group, Qatar won the first place, while Iraq needs to beat “Al Annabi” to qualify as runners-up, and the “Rafidain Lions” may be enough to qualify, if the Bahrain-Oman match ends in a draw, and on the other hand, winning will be the only option for Bahrain or Oman to qualify, provided that they lose. Iraq.
In the second group, it is sufficient for the Emirates to draw against Tunisia to decide the first place. In the event of a loss, qualification is linked to Syria’s stumbling against Mauritania, whether with a tie or loss, and Tunisia needs a win or a tie in the event of Syria’s loss, while “Nour Qasioun” is interested in winning against Mauritania, provided that Tunisia or the Emirates stumbled by a loss or a draw.
In the third group, Jordan needs to beat Palestine, to decide its qualification directly or draw, provided that Saudi Arabia draw or lose against Morocco. Jordan lost.
In the fourth group, the qualification cards went to Egypt and Algeria, each with 6 points, and they will meet on Tuesday in a strong and exciting match, in search of a decisive lead in the group.
The qualification regulations stipulate that in the event of more than one team being equal, the goal difference and the number of goals scored by each team will be considered. With him, and after him fair play.

PlayStation: Man can't stop playing while his house is on fire