10 seasonal dishes that you can only make now 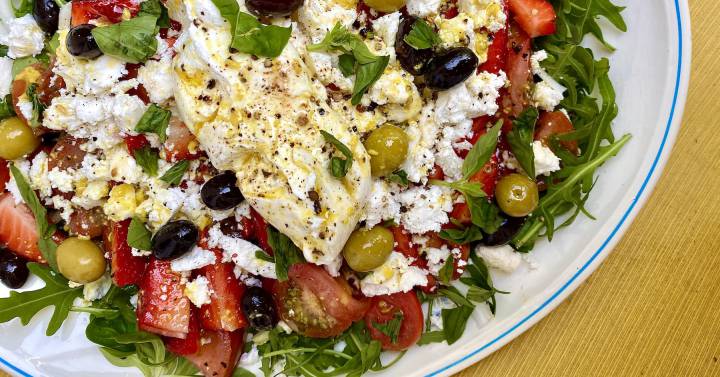 The winter ingredients are gone, the spring ones have already exploded and the summer ones are beginning to show their legs: May is a privileged month for fruits and vegetables, and it allows us delicious combinations that we can apply both in sweet and salty dishes, raw or cooked. In addition, we enjoy some special characteristics of each food: the last raf tomatoes, very sweet and with a concentrated flavor, combine perfectly with strawberries in all their splendor. The first nectarines of the season —a little acidic and harder than the summer ones— are perfect for grilling and accompanying fatty meats or fish, which they compensate for with their freshness.

We have spreads, light salads with fruit and other more forceful ones with potatoes that can almost function as a single dish if you add a couple of boiled eggs, appetizers that can be turned into sauces, very easy sautés, confits that need to be given a little of affection and even a sweet version of labneh (fermented milk) that you can adapt to the fruits of each season. (Almost) all the recipes are for four people, and the calendar we use as a reference for the seasonality of food is I’m in season.

Remove the stalk from 600 g of raf tomatoes —those at the end of the season are sweet and tasty, you have to take advantage of them— and chop them, wash 400 g of strawberries, remove the stalk and cut them lengthwise into four or eight pieces (or more if they are very large strawberries). Finely chop half a sweet white onion and mix it with two handfuls of arugula and lamb’s lettuce, or half and half. Prepare a vinaigrette with eight tablespoons of virgin olive oil, apple or sherry vinegar, salt and pepper and pour three quarters of it over the salad. Stir and add cream cheese to taste —a 250g burrata, manouri, ricotta or whatever you prefer—, and finish with the rest of the dressing, some olives and some chopped basil.

Peel and finely chop a spring onion or half a sweet onion and slice eight radishes, mix with a little mustard, a generous splash of Perrins sauce, eight tablespoons of olive oil, salt, pepper and a little vinegar and let the vinaigrette rest for a few 20 minutes. Cut the base of the stem of six endives and then cut them into four lengthwise, and arrange them on a tray or four plates. Coarsely chop —by hand— 400 grams of tuna and mix with ⅓ of the vinaigrette. Spread the tartar over the chard, top with the rest of the vinaigrette and serve quickly (before the vinegar cooks the fish and turns ugly).

See also  X-ray of a drug kidnapping: "It was hell, I felt death at every moment"

Bake six portion potatoes and four medium beets for about 50 minutes at 180 degrees (use the rest of the oven space to cook other things at the same time). Prepare a sauce with Greek yogurt, half a clove of garlic —or one—, a splash of oil, ½ teaspoon of cumin seeds and lemon to taste. When they are no longer burning, peel and chop the potatoes and beets, add three tender stalks of chopped celery and dress with the yogurt sauce. Top with capers to taste.

Broad beans and candied artichokes with mint and poached egg

Put plenty of oil in a pan (about two or three fingers). Remove the outer leaves of 12 artichokes until the base is light yellow, peel the stems without separating them from the flower and cut the tip, open them lengthwise and, if they have, empty the inside of each one with a spoon. . Pass them to the pan quickly so that they are well impregnated with oil and do not rust. Add 400 g of peeled broad beans and four mint leaves, and cook over low heat checking that the temperature does not rise —that the oil does not bubble— until they are cooked but not soft, about 45 minutes, and leave to cool in the same oil. Chop more mint until you get a tablespoon. Drain the artichokes and broad beans very well, discard the cooking mint leaves and reserve the oil for other preparations. Brown the artichokes in a very hot pan for one minute on each side, reheat the broad beans in the same pan and serve with salt flakes on top, minced mint and, if desired, a poached egg per serving.

Prepare a vinaigrette by mashing eight raspberries with eight tablespoons of olive oil, salt, pepper and apple cider vinegar to taste. Thinly slice a couple of green onions or spring onion stems. Put 250 g of baby spinach sprouts in a bowl and add 50 g of blackberries, 50 g of blueberries and almost all of the spring onion. Dress with ⅔ of the vinaigrette. Top with 100 g of thinly sliced ​​cured cheese, 25 g of raspberries and 25 g of blueberries, the rest of the spring onions and the rest of the vinaigrette and serve immediately.

Wash about 800 g of Swiss chard well and separate the leaves from the leaves. Cut the leaves into pieces of about two centimeters and the leaves into pieces of about three. Cut eight baby carrots into slices about one centimeter. Put the stalks in a saucepan with a lid that fits well with a little oil, give them a few turns and raise the heat. Put about 75 ml of water and cover; Wait two or three minutes for it to evaporate. Add the carrots and repeat the operation twice. Add the leaves and repeat the operation two more times, always allowing the liquid to evaporate completely (if there is any left, lower the heat to medium, leave uncovered and stir from time to time so that it does not burn). Meanwhile, prepare the Bilbao sauce by browning four sliced ​​garlic cloves and between one and three chillies -depending on your tolerance for heat- in eight tablespoons of virgin olive oil. Remove from the heat, add vinegar to taste -beware of splashes- and return to the heat, stirring for a minute. Put the Bilbao over the vegetables and stir: they can be used as a garnish for a grilled chicken breast or fish, served over cooked rice with some canned sardines or hard-boiled eggs, or topped off with some cooked chickpeas.

Boil 600 g of peeled peas in salted water for four minutes or steam them 6. Stop cooking with plenty of ice water. Peel and chop two cloves of garlic and brown them with a couple of tablespoons of butter and a dash of olive oil (so it doesn’t burn). Remove the woody part from 400 g of asparagus and cut it into three or four pieces. Add the quartered mushrooms first and the asparagus stems -reserving the tips- and sauté for about four minutes (the asparagus must remain crisp). Add the peas and stir for a couple more minutes, season with salt and pepper and serve immediately: you can add some prawns, which we would add at the same time as the peas so that they do not overcook.

Broccoli and Avocado Spread with Za’atar

Separate the florets from a small broccoli and cut the stem into approximately half-centimeter slices and steam for about eight minutes (or microwave for four). When it is a little tender, remove and stop cooking with cold water. Blend together with two avocados, lemon juice, za’atar and paprika to taste; if it is necessary to lighten the texture, do it with a little cold water. Transfer to a bowl and serve with a splash of oil and more za’atar on top: as an appetizer it serves six or eight people, it can also be used as a dressing for a vegetable and tomato salad.

Salmon with nectarines braised with rum and honey

Cut four nectarines in four lengthwise and remove the seed. Iron them for about three minutes on each side over medium heat, in the last three minutes add a generous stream of rum and a less generous stream of honey and at the end of cooking, turn them over for a couple of minutes so that they are impregnated. Season with salt and pepper, if you want to add a few flakes of chili and place on a plate. In the same pan, lightly brown four salmon supremes of about 150 grams on both sides over medium heat (to taste, with a minute on each side it reaches me). Season with salt and pepper and serve with the nectarines and ¼ lime to squeeze just before eating.

Prepare labneh with four yogurts following this method but without the salt. After about 12 hours, remove it and beat well with one or two tablespoons of brown sugar. Serve in four deep plates with 300 g of pitted cherries, and eight apricots cut into wedges. Top with a little sesame and chocolate with 70% grated cocoa to taste.

Sixteen products and utensils that will make your kitchen more sustainable