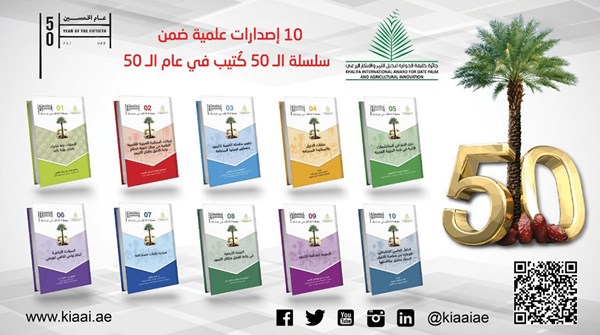 The General Secretariat of the Khalifa International Award for Date Palm and Agricultural Innovation issued the first batch of the series of 50 booklets launched by the award, in celebration of the year 50, which aims to disseminate specialized scientific knowledge, in compliance with the award’s objectives and transfer knowledge to farmers and those interested working in the palm cultivation, date production and innovation sector Agriculture at the national, Arab and international levels.
Dr. Abdel Wahab Zayed, Secretary General of the Award, said: The first batch of booklets comes as part of this initiative to celebrate the fiftieth anniversary of the founding of the United Arab Emirates, coinciding with the fiftieth year.
The study, prepared by Dr. Hilal Humaid Saed Al Kaabi, Secretary General of the Abu Dhabi Quality and Conformity Council, pointed to the insightful vision of the late Sheikh Zayed bin Sultan Al Nahyan (may God rest his soul) in his interest in agriculture in general and increasing the green area. The study prepared by Professor Ibrahim Adam indicated Ahmed Al-Dukhairi, Director-General of the Arab Organization for Agricultural Development, referred to the organization’s efforts since its establishment in Khartoum in developing the palm cultivation and date production sector in the Arab countries by increasing the cultivated areas and combating pests and diseases that affect palm trees.
The study prepared by Dr. Amjad Ahmed Mohamed El-Qadi, Director of the Food Industries Technology and Agricultural Processing Center (FAITC) of the Industry Council for Technology and Innovation at the Ministry of Trade and Industry in the Arab Republic of Egypt, touched on a set of challenges facing the Arab dates. Khalil Mahmoud, from the Republic of Iraq, indicated that date palm trees and their fruits are attacked by many insect pests, such as palm borers, which are one of the insect pests that cause severe damage to palm trees. Insect-pathogenic nematodes are also considered one of the effective biological agents that are used to control a wide range of insect hosts, as it is one of the safe methods that do not affect non-target organisms.
The study of the date palm in the archaeological finds in the Arabian Peninsula, prepared by Dr. Vivian Hanna Choueiri, Professor of Archeology, Civilizations and Ancient Languages ​​at the Lebanese University, pointed out that the date palm tree has its roots in the soil of the Arabs thousands of years ago.

sustainable oases
The study of the sustainable oases initiative presented by Eng. Mohamed Bachiri, Director of Strategy and Cooperation at the National Agency for the Development of Oasis and Argan Trees in the Kingdom of Morocco, addressed the importance of establishing an international alliance on the “sustainable oases” initiative, among the countries concerned with the problem faced by date palm oases along the desert region. extending from the Persian Gulf to the Atlantic Ocean. In a study on the Jordanian experience in palm cultivation and date production, Eng. Anwar Hilal Abdullah Haddad, President of the Jordan Dates Association, pointed out the main factors that contributed to the quality of Jordanian dates despite the short lifespan of the experiment, which does not exceed 20 years.
On the nutritional benefits of dates, the study presented by Engineer Nada Zuhair Ahmed Al-Adeeb, Director of Community Nutrition Department, Tawam Hospital, Abu Dhabi Health Company, Secretary-General of the Emirates Nutrition Association, indicated that dates played an important role in the cultural heritage of the UAE and many Middle Eastern countries.
In the study of the scientific evidence for the prevention of red palm weevil and ways to combat it, the study presented by Eng. Khaled bin Al-Waleed Mahmoud and Engineer Islam Mahmoud Abdel Alim, from the Arab Republic of Egypt, answered a number of important questions, most notably is the red palm weevil a pest that cannot be eliminated?

M5S, Chief Count, but it is feared that Grillo will blow everything up. Inside