A man taking money from the ATM. / RC

The Bank of Spain reveals that the inhabitants of the provinces of León, Salamanca and Zamora are the most vulnerable because they do not have easy access to bank offices

36% of Spaniards prefer to pay for their purchases in cash. They are much less than 80% in 2014, in addition to the fact that the pandemic has encouraged many to use the card for fear of contagion, according to recent data from the Bank of Spain. Even so, the body considers that the access that Spaniards have to cash in their places of residence is important and in a study published this Wednesday reveals that 1.3 million citizens have it complicated.

The Bank of Spain ensures that the degree of physical access to basic financial services and means of payment such as cash determines, in part, the level of financial inclusion of the population. In this sense, it warns that the reduction in the number of access points to cash since 2008 has been “very notable.” The number of bank branches has fallen by 50% and the total number of ATMs has been cut by 20%.

The problem is the difference between provinces, with an “asymmetric effect on the coverage of the traditional cash infrastructure and, therefore, on access to this means of payment,” the report explains. And although as a general assessment, the agency concludes that a high percentage of the population have a cash point at a distance of less than 5 kilometers, almost 1.2 million citizens did not have a traditional point of access to the cash in your municipality. 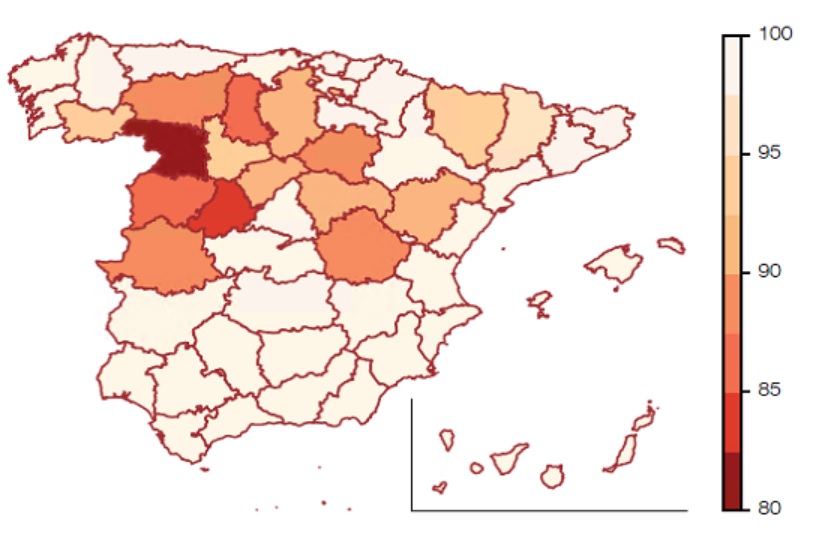 Graph showing the percentage of the population with a point of access to cash within 5 km. /

Thus, according to the index established by the Bank of Spain, around 340,000 people live in municipalities with a high vulnerability of access to cash (0.7% of the Spanish population). These are municipalities that do not have traditional access points to cash and the average distance to the closest is 9.4 km. They are small municipalities, with an average population of 400 inhabitants. The provinces of León, Salamanca and Zamora concentrate most of the population with high vulnerability in access to cash, they point out.

In addition, about one million citizens live in municipalities with a medium vulnerability. That is, on average they have 0.6 access points for every 1,000 inhabitants and the average distance to them is 3 km. They are medium municipalities, with about 1,700 inhabitants. The Galician provinces of Lugo, La Coruña and Orense concentrate 24% of the population of average vulnerability of access to cash.

Thus, although more than 98% of the population has a traditional point of access to cash within a radius of 5 km, even though it is not located in their municipality, the report concludes that there is great heterogeneity between regions. While in six Spanish provinces (such as Vizcaya, Tenerife or Cádiz) and in Ceuta and Melilla 100% of the inhabitants have a bank office or an ATM within a radius of 5 km, in another 36 provinces this percentage is situated between 90% and 99%, and in eight it is less than 90%. Castilla y León is the community with the least extensive coverage, with Zamora and Ávila at the fore.

The agency has also analyzed the consequences of an eventual closure of offices in different regions and concludes that the impact is “very uneven” between provinces because it depends on their current situation. Thus, when comparing Cáceres and Soria, in the former there are cases with a single access point to cash that provides service to up to seven municipalities, so its disappearance would have a very negative effect on network coverage.

While in Soria, although it currently has coverage similar to that of Cáceres, the closure of these access points would have a lesser impact even if the average distance of access to a cash point were increased to 13.5 km. half.

And although mobile offices that facilitate access to banking services, especially in rural areas, are increasing, as well as the promotion of the post office network as an alternative means of giving cash, their implementation in Spain is still far below that of countries like Ireland, United Kingdom or Australia. The Bank of Spain emphasizes that the impulse to the use of post offices for this purpose could be very positive due to their wide dispersion and capillarity in the territory.